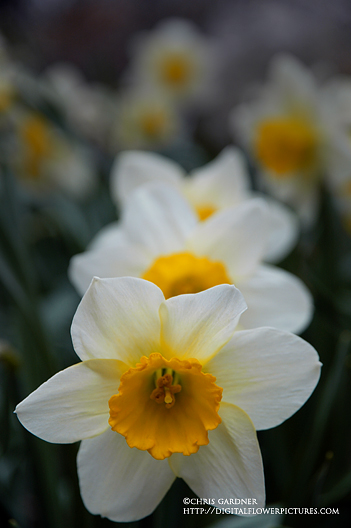 Another daffodil shot. Can you tell who is dreaming about spring already? As a gardener it always pays to try and think a couple of seasons ahead because they seem to arrive and pass by no matter what.

This shot was a depth of field experiment that was conducted with my least used lens and back up camera body. So the Sigma 17-70mm f/2.8-4 macro lens and the Nikon D70s body. The lens has proven to be a tough performer with good color rendition and sharpness. This model isn’t manufactured anymore without Sigma’s built-in image stabilizer (OS). It was a cheap lens and I bought it several years ago to replace a broken Nikon 18-70mm lens.

What I have found is I don’t like zoom lenses at all. The 80-200mm/2.8 zoom is a great lens but when it is on the camera I often forget it is a zoom and don’t operate it properly. The 17-70mm did okay on this test producing good exposure with good bokeh (background blur) although it isn’t as creamy as the Nikon lenses. The Sigma vs. Nikon lens debate continues to rage and I have to say that Sigma seems to suffer from quality control problems sometimes and there seems to be good and bad copies of everyone of their models. Mine, luckily, have been good and it never seems to be a disadvantage to have them on the camera.

Neil Young’s Cinnamon Girl and an old Kinks song are on my to-do list today. I am breaking out one of the Les Paul copies for Cinnamon Girl since it is in an open tuning. For me it is better to have an extra guitar pre-tuned and not mess with tuning them on stage.
Posted by Digital Flower Pictures at 9:43 AM