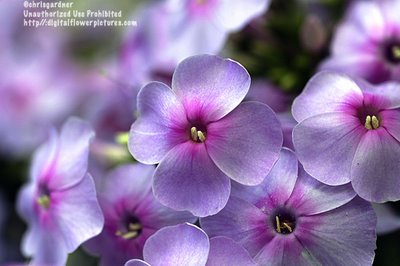 This Phlox was labeled ‘Speed Limit 45’ at my local nursery. The owner assured me of this. It seems a little bluer than other pictures I have seen. In recent trials, ‘Speed Limit’ was one of only a few cultivars that rated highly resistant to powdery mildew. It seems like they could have come up with a better name than that. Overall, the newer cultivars seem to be more resistant to mildew, but I have resigned myself to having it. This year the Phlox were exceptional, and only recently did I notice some mildew.

Garden Phlox is a classic addition to any garden. There are 32 species of Phlox and they are mainly native to North America. Many of the species are grown in ornamental gardens.
Posted by Digital Flower Pictures at 5:36 AM