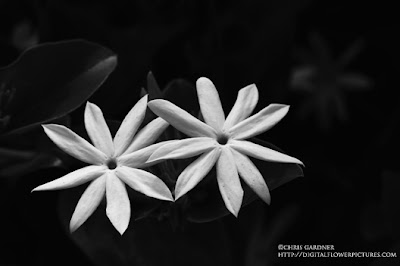 I a pretty sure this was Angelwing Jasmine (Jasminum nitidum) but it didn’t seem to have the twining vine habit of that plant. This is a photograph that I wish had paid more attention to the plant for identification purposes. The fragrance was enchanting and is still lingering in my mind. This picture was shot in monochrome with the D700 and the 105mm Vr lens. Looking back it probably could have been slightly more exposed but at least the whites didn’t blow out.

It will be a little while until we are back on east coast time. This next picture is pretty much what my day consisted of yesterday, watching the planes pull in and out of LAX. This was shot with the Coolpix P6000. It is nice to have kind of a small incognito camera because I am not sure about the photography rules at airports these days. This plane is an American Airlines 767-200 and it was bound for JFK. According to Wikipedia the 767-200ER is:

“The extended-range variant of the original Boeing 767, the 767-200ER, was first delivered to El Al in 1984. This model became the first 767 to complete a nonstop transatlantic journey, and broke the flying distance record for a twinjet airliner on April 17, 1988, with an Air Mauritius 767-200ER flying 8,727 nautical miles (16,162 km) between Halifax, Nova Scotia and Port Louis, Mauritius. The 767-200ER became popular overseas with smaller operators seeking wide-body airliners but not needing the 747's capacity.” 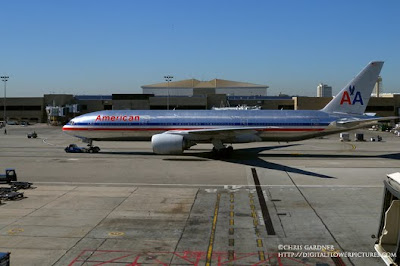 Click Here for a Larger Version
Ours was the next flight an hour later but was cancelled.
Posted by Digital Flower Pictures at 10:12 AM

Nice photos Chris. Hope your flight isn't too delayed (again) with this weather the flights have stacked up for a number of days.

We made it home, Janet. It was just 36 hours after I planned.