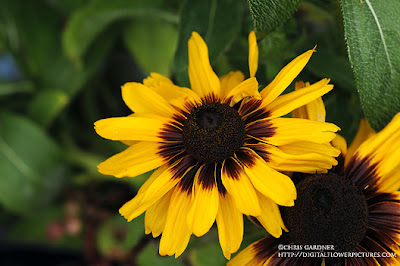 This seems like a new variety of Black-eyed Susan but may have been around for a while. I am thinking it is new since this is the first year I have seen it for sale at several places. I bought one for a container and it looked pretty mixed with some white petunia and yellow Lantana. One thing that is remarkable is that of the 20 or so flowers on my 6-inch pot none were the same. Each had their own striking markings around the center of the flower. Some also had larger brown cones in the middle. It is quite a feast for the eyes, Lucky it only grows to 18 to 24 inches, as the flowers look heavy compared to the stalks.

Black-eyed Susans add a nice touch to summer. The yellow flowers are produced in copious numbers and liven up the garden at a time when it needs it. There are more and more varieties coming out all the time. It is an easy perennial to grow and can colonize rough areas. It doesn't seem to need much in the way of maintenance or care. The spreading habit is good way to get free plants.

Posted by Digital Flower Pictures at 7:20 AM