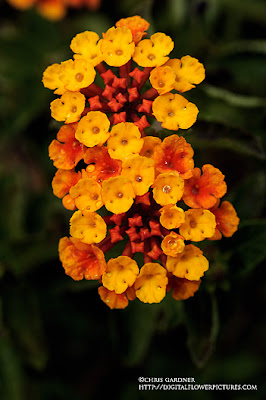 This is the first year we are growing Tangerine Lantana and it has done well. Despite our relatively cool summer and wet August the Lantanas have been chugging along. My personal preference for Lantana is to grow the solid color types. We have an all white, all yellow, mostly red and the Tangerine, which is mostly orange. The solid colors are more pleasing to me but the growth rate and flowering seem about the same. It is a pleasant annual to have in the garden but be aware that the leaves are poisonous but the berries provide a nice food source for the birds.

Last night the legendary Texas band ZZ Top rolled into our little city. Even with the threat of rain we decided to go. They played a great show and I don’t think I have heard guitar playing like that for a long time. The seemingly effortless style of the band was amazing. You could tell they have been together for a long time (40 years and over 50 million albums sold). The only thing that was a little disappointing that some of the legendary guitar collection seemed to have been left at home. They did play the white furry ones and a sunburst Les Paul. It wasn’t the fabled ’59 Sunburst ‘Pearly Gates’ but still sounded great. I don’t think ‘Pearly Gates‘ goes on the road anymore. I think the main guitar he played was a Gretsch G6199 "Billy-Bo" Jupiter Thunderbird replica. It had a beautiful design on it. Fitting I guess for a Sharp Dressed Man.

As anyone who reads this blog knows I really like the pop star/actress Selena Gomez (1.45 million albums sold). It was a pleasure to see her in concert last Saturday night and meet her earlier in her tour. The juxtaposition between seeing Selena and ZZ Top in 5 days was pretty amazing. A little known fact about me (well not anymore I guess) is that I like Pop music and while I don’t know exactly what songs are on the charts at any given time I do probably have some knowledge of the songs. Selena’s concert was great. She really worked hard on putting on the best show she could and it worked. She is working with UNICEF (she is the youngest UNICEF Ambassador ever) and the George Harrison fund to look back on the 40th Anniversary of the Concert for Bangladesh. There was a short video clip of Harrison, Dylan, Billy Preston, Leon Russell and Eric Clapton playing and talking. The last thing I expected to see at the pop concert. It was awesome and Selena is working with these people. Here is the video:

On the other hand you have ZZ Top. Just a "That Little Ol' Band from Texas" as they like to be known. To me Billy F. Gibbons is one of the best rock and roll guitarists America has ever produced. He went through several music styles with a smoothness that was stupendous. The look and feel of the ZZ Top concert was very slick with a minimum of equipment and tricks. I really wanted to support our local venue for having such a big rock and roll concert. The place was mobbed and I haven’t ever seen it that crowded (been to about 20 shows up there).

Posted by Digital Flower Pictures at 9:36 AM