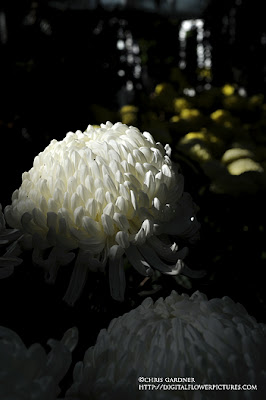 Just when I was thinking I haven’t taken an insect picture in a while this Hoover Fly landed on the mum I was going to take a picture of. These insects do not sting and are beneficial to the garden. The population is way up here and the Asters at work were literally a cloud of Hoovers.

This picture was taken with my back up camera. A d70s with the 105mm Nikon macro lens. Pretty nice to have back up equipment this good.

Posted by Digital Flower Pictures at 9:14 AM

Haven't seen mums like that in our area. Spectacular! I also like your insect picture on the bloom.

Visiting from Today's Flower, please come and see some Rose's Disease at my page. Have a blessed Sunday!