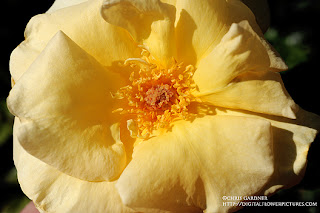 I would like to introduce you to a 2012 All-American Rose selection called ‘Sunshine Daydream’. This one was spotted in the small but nice rose garden inside the Magic Kingdom. The garden itself was a surprise and I was excited to see that it featured AARS roses. In general the roses we saw in Central Florida were fabulous. They were blooming seemingly everywhere. Knockout roses were leading the charge, of course, but there were plenty of hybrid teas, grandiflora and shrub roses. One type that was “missing” was the ground cover/landscape roses but they were hardly missed.

‘Sunshine Daydream’ is listed as both a hybrid tea and grandiflora rose so I don’t know what’s up with that. It looks more like a grandiflora to me. Its disease resistance is supposed to be very good, which makes it more environmentally friendly rose. It also grows tall (up to 5 feet) and bushy. The specimens we saw were clean and vigorous. There was no discernable fragrance.
Posted by Digital Flower Pictures at 7:54 AM