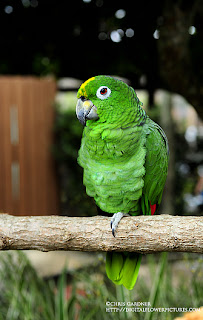 No trip to Florida would be complete without a couple of exotic bird pictures. This is one area I was hurt by my lens selection there wasn’t anything longer than 70mm in my bag. I wanted to take my 80-200mm but thought it was just too conspicuous to use at the parks. Turns out I saw plenty of people using 70-300 and also the 70-200mm Nikon lenses both of which are pretty big. Disney really didn’t have any photo restrictions (except no flash on some rides) and that was nice. They have this amazing Photo Pass system of photographers roaming the parks and they were nice enough to use your camera or step out of the way for you to take shots.

The Green Parrot looked a little cold but came out with a big hearty “Hello” when I was taking his picture. It caused me a little chuckle and he didn’t seem to mind posing for a few snaps. 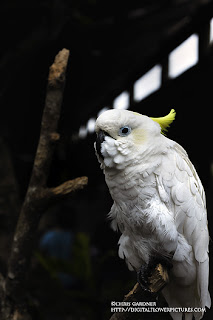 This bird is a Sulphur-crested Cockatoo (Cacatua galerita). He was not as friendly but still consented to some photos.
Posted by Digital Flower Pictures at 8:48 AM