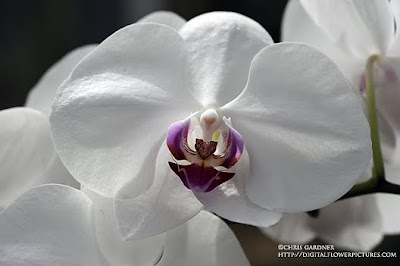 Since there hasn’t been an Orchid posted here in a while here is a close up of a white Phalaenopsis type. It is one of the most popular species of Orchids and one that has under gone massive breeding and cross-fertilization to produce many new colors and hybrids. The plants now available are generally better adapted to growing in our houses and gardens then their natural cousins. The common name was given as some of the flowers look like a moth in flight.

Since it is Sunday come join us at Today’s Flowers. 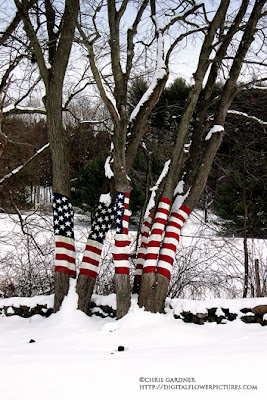 Here is the bonus picture for Sunday. It was obviously taken several months ago, as we don’t have any snow right now. This picture doesn’t really show the brilliance of this piece of art. It really does look like a fluttering flag when driving by. I looked around for a signature or sign but couldn’t really find who had made it. Of course it is the gruesome 10th anniversary of the terror attacks on the United States. It doesn’t seem to have been 10 years since that terrible day but the calendar says so. Originally I thought this area would never fully recover from the destruction but it has. I drive by ground zero a couple of times a month on the way to tend to the Manhattan garden we keep and it seems almost normal again. Although the events that happened there have wrought more death and destruction around the world and that is still going on.

Posted by Digital Flower Pictures at 7:59 AM

Can't think of one flower that does not look good.
But I love the sign! That day in Sept. 10 years ago also brought us not only loss, but much gain in terms of awareness, and heroes.

This is a wonderful post. I think I may have seen those trees. Amazing what people can do--and do! Beautiful.