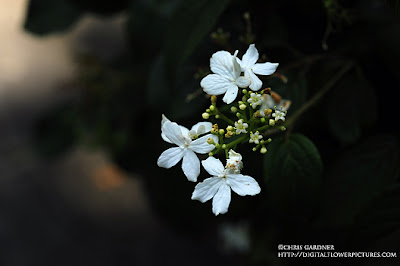 This is an amazing shrub and I was surprised that it is actually a type of Doublefile Viburnum. It is so dainty compared to the larger cousins like ‘Shasta’ Viburnum. Although it does reach 8 to 10 feet tall it seems to get there slowly and can be easily maintained at shorter heights. I do think that Doublefiles are one of the most graceful and beautiful shrubs except they are often planted with not enough room and get a slightly hatcheted appearance due to heavy pruning. Luckily ‘Summer Snowflake’ doesn’t usually need that so it can be used in a foundation planting. This shrub often blooms sporadically throughout the summer. I am always surprised to see it with some flowers long after the spring Viburnum season has ended.

One thing I learned about Viburnum plicatum while making this post was they were discovered in a Shanghai garden by Robert Fortune and introduced to the west in 1850. No known specimens are known to exist in the wild and they are all considered of horticultural origin.

We have our monthly gig at the local coffeehouse tonight. After taking a couple of months off I am really looking forward to it. I have decided to take my 1957 Fender Stratocaster out for the first time in several years. After having a conversation with a friend last week in which I said that I don’t like to take it out of the house these days. He asked me why even have it? That made me think about it and he is right. What is the reason for having a classic car and never driving it? I guess I am a little worried about something happening to it because it is certainly irreplaceable to me at this point (lucky I bought it 1985 before prices soared but it was still a stretch at that point). The coffeehouse is okay but I certainly wouldn’t want some drunk tripping over it or spilling a beer on it at a bar/club gig (both have happened to me before). Back up will be my 1991 American made Telecaster. It is virtually indestructible. 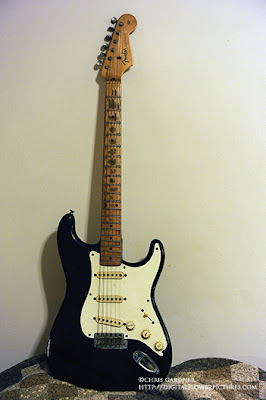 You are my date tonight, old friend. Do you remember that old Jimi Hendrix song we used to play?

Funny you should profile this shrub today, a fellow blogger wrote me an email suggesting I try a Shasta Viburnum. Yours sounds most interesting. Have some V. tinus that could use some company....a little variety is good. Mono-cultures in the garden worry me when there is a pest/virus/or conditions said plant can't handle...then you have lost them all.
Enjoy playing that wonderful guitar tonight. We saw a blues show this week...Chris Thomas King, the one in 'O Brother Where Art Thou' who sold his soul to the devil to play the blues. Great show!