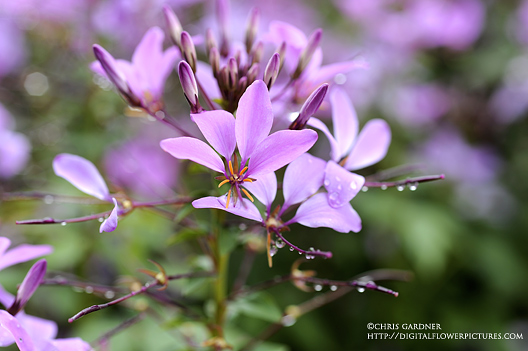 This flower was featured on this blog on Thursday, July 10, 2008 and at the time it was new to me and everyone else as it was introduced in that year. It performed well as a mid-season container replacement without some of the common problems of Cleome culture. It doesn’t smell that bad (like the species) and is also thornless. They also are more heat tolerant and don’t need deadheading.

'Senorita Rosalita' has really stormed the market as far as I am concerned. You can see it planted now and growing all most anywhere. I really didn’t think it would catch on that big but it has. Plant breeding is so amazing to me. Annuals have come so far since I started my career. It’s kind of like watching history and if you do not keep your eyes open it just assimilates into life. Cleome 'Senorita Rosalita' is a flower that has joined the ranks of being a well-bred good garden citizen and that is something the Species could never (or it would take millions of years) do.
Posted by Digital Flower Pictures at 9:33 AM