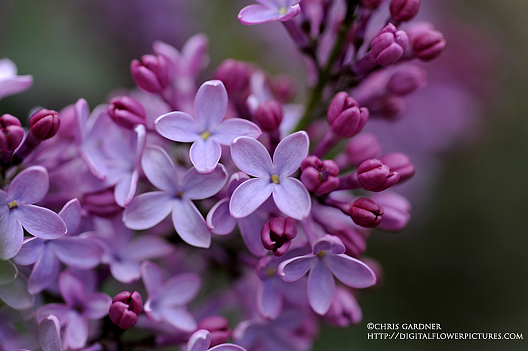 This is a rare flower from my home garden. What is left of the garden after the October snowstorm. What the storm didn’t take out the deer seemed determined to finish off. These Lilacs were on the property when I moved here and are huge. Big enough to cut arm loads of flowers when they are blooming. The insides of the plants were crushed but the outer branches are blooming now and it is always pleasant. There is one white lilac amongst the purples but it doesn’t seem to bloom as well as the others. We have been collecting the seedlings and making a small forest of the shrubs but they seem to take a long time to get to blooming age.

Did anyone watch Selena Gomez sing a song on Dancing with the Stars this week? I only watched since she was performing her new single, ‘Hit the Lights’. It was nice to see her with her old band, which has been broken up for a few months now. Her new guitar player was playing a *gasp* Fender® guitar. That ups his coolness factor with me. I don’t know how long this video will be on you tube but here is her performance:

Beautiful flower. Catching up for WW.