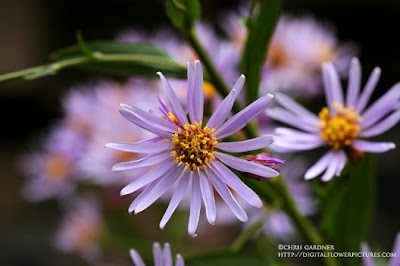 One thing nice about digital photography is that you can compare shots over several years easily. These were taken in the fall of 2005 and from the other photos on the ‘roll’ we were having a nice fall. There were pictures of a job we installed that year and it is amazing how much it has grown in four years. The flower picture, which is an Aster, was taken on October 3rd and the Japanese Maple leaf was shot on October 20th, 2005. 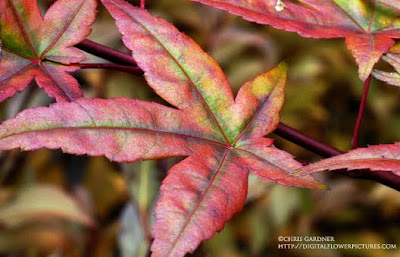 Hopefully I can get away for a few hours this weekend to take some seasonal photos. It is best to go early in the season because that is when the displays are at their best. Maybe there will some nice fall color but it seems to be coming in drips and drabs this year. I wonder what this fall will look like when I am looking back at it in 2013.
Posted by Digital Flower Pictures at 7:49 AM

I'm sorry that Fall isn't as 'good' this year, but it seems to be really good here, at least in the form of the Fall wildflowers. Everything is blooming like crazy and doing well. Of course we lack the colors of the north, but subtle is nice too.