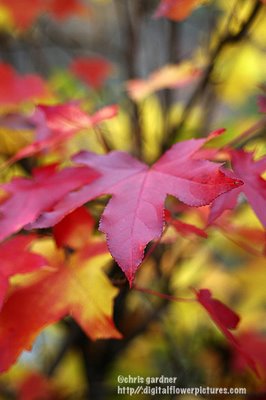 This is a funny little tree. I sometimes think that large parts of it are dead in the spring. I have learned to have patience with it as it usually fills in nicely. My tree has remained very short, about 7 feet in 10 years, compared to the species, which can get 90 feet tall. ‘Gumball’ has a very tight and twiggy branching pattern and it does remain very round. Mine is grafted on a standard about 3 feet off the ground. It doesn’t seem to produce those annoying seedpods. If you are looking for an unusual dwarf tree this might be your ticket. Mine is planted next to a pond spillway and hasn’t had any detriment from the wet soil (the spillway leaks a little).

The species is definitely worth considering if you have a large area for a tree. The star shaped maple-like foliage is glossy green and turns a beautiful mix of color in the fall. This tree can easily be mistaken for a Maple, however Liquidambar leaves are alternate. Something I learned when I looked this tree up is that it has aromatic foliage that smell like camphor. I guess I will have to wait until next year to check that out. The bark can develop a nice corky winged appearance. The wood is used for several commercial purposes including being an important ingredient in plywood. According to Wikipedia “The trees yield a gum known as storax, used in herbal medicine. This gum contains a small amount of the aromatic hydrocarbon styrene; the styrene extracted from Liquidambar orientalis gum resulted in the discovery in 1839 of the first known polymer polystyrene.”

I have been growing another cultivar called 'Rotundiloba'. It seems like a nice tree but hasn’t grown much. The leaves are rounded and it exhibits the same fall color as the species. It is said not to produce the spiky (they look like little mace heads) seedpods.

I got the estimate on my camera today. It is $200 to repair, which is a little more than I thought, but still well within the worthwhile range. The camera shorted out when Karen inserted the flash card the wrong way (on the Coolpix 8400 you have to put in upside down). I will post the name of the company fixing it when I get it back. So far they seem very efficient. I missed the camera the other day when I was in NYC. I find a Point and Shoot to be better for taking pictures down there. It is going to take 5-7 days to fix, which is a fast turn around.

(Synonym: Redgum)
Posted by Digital Flower Pictures at 6:23 AM