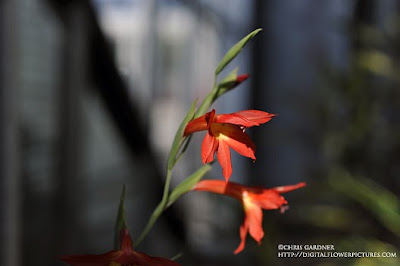 This is a species of Gladiolus that is native to South Africa. I had never seen it until I took this picture at Wave Hill. It is considered easy to grow and is a winter bloomer. Gladiolus seems to have really taken a hit as far as its popularity. I always forget to get a couple for the garden and they just don’t seem as available. The staking is the part that I don’t like about growing them. It is difficult to stake them and have them look right. More often then not the flowers seem to be laying on the ground or shooting out of the plant at an odd angle.

"Flowers are restful to look at. They have neither emotions nor conflicts."
Sigmund Freud
Posted by Digital Flower Pictures at 9:10 AM

Email ThisBlogThis!Share to TwitterShare to FacebookShare to Pinterest
Labels: gladiolus

I love Glads. All varities. Thank you for this shot.

so pretty! i have never heard of a winter gladiolus....

You are right, gladiolii are no longer favourites.

I have to admit that the reason i don't grow them is they need to be staked. But this is such a pretty variety!