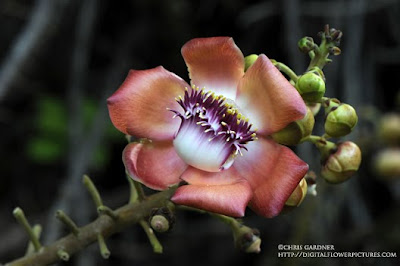 This tree was blooming at the Foster’s Botanical Garden in Honolulu. It is an amazing garden partly because of the collection of trees and flowers and partly since it is right downtown. As you are viewing the various tropical plants they are completely ringed by high rise buildings. It is easy to blot out the cityscape and focus on the plants.

This is a tree I had never seen before and it had the appearance that its flowers and cannonballs were growing on a vine that was climbing up the trunk but closer examination showed the vine looking parts were actually short branches coming from the trunk. The blooms were fragrant and highly detailed. The “watch out for falling cannonballs” sign was funny. It was nice that the flowers were almost right to the ground because there were several trees that were blooming that you couldn’t really see, as they were very tall and the branches started 20 or 30 feet from the ground. You could only see spent flowers around the base.
Click Here for a Larger Version of the Cannon Ball Tree 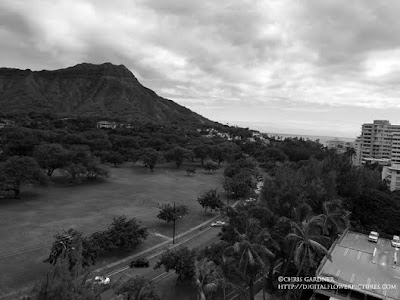 That blossom from the cannonball tree is so lovely and is best viewed large.

I believe Fairchild has one of those trees. Beautiful flowers!

Wow... what an exquisite bloom!

Even in b&w it looks green and lush. I am looking forward to more tropical shots as snow moves this way.

Thanks for all the comments. Wish you all were here.

Les, I posted a tropical picture for you on Friday. You would truly love the plant life here.