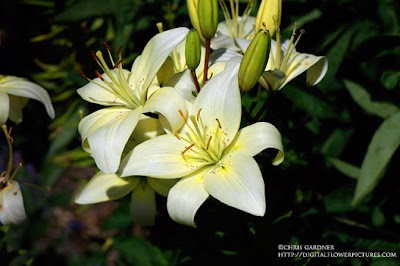 This Lily came in a end of the season batch from White Flower Farm last year (2008). It was really late and I happened to stop at the WFF store in Litchfield and there were all of the left over Lilies at 50% or more off the price. The kind of random collection was planted under a perennial border came out great. They bloomed from May to August and it was fun to see all the different types coming out and blooming.

While I think planning most every thing in the garden is a good idea sometimes just following a feeling or intuition can be good too. Sometimes it is easy to get in the habit of just doing and planting what you know is going to work from experience. Trying new plants and combinations is one of the true joys of gardening to me. Although it can backfire it is still worth the risk to me. The Lilies worked out even though it was a spur of the moment thing.

White Lilies have their roots in Roman mythology. While Juno (queen of the gods) was nursing her son Hercules some excess milk spilled and formed the Milky Way galaxy. After that was done the extra milk fell to earth and formed White Lilies.

Best wishes for the New Year.
Posted by Digital Flower Pictures at 8:39 AM

I did not know that bit of mythology about white lilies. Glad we found each others blogs on The Photo Forum, although I really don't post there much anymore.

Kala, I am happy too. I really think your work is special.