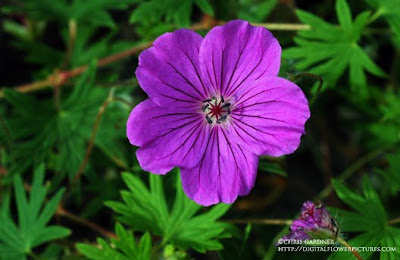 This new Hardy Geranium was a big hit last year. It is a sterile hybrid between Bloody Cranesbill (G. sanguineum) and Armenian Cranesbill (G. psilostemon). The flowers are a really deep color and while not quite the profuse flowerer that the other Hardy Cranesbills are it did well. The color makes up for the difference in the amount of flowers. That tag said that it grows up to 36 inches tall but the ones in the garden were more like 18 inches tall. All of the Hardy Geraniums did very well last year and were a pleasure to have around. Their fiery fall color was an extra bonus.

Hardy Geraniums like a moist, but not wet, site with plenty of organic matter in the soil. They do well with light shade and need more shade in southern gardens. If they start to look bad they can be sheared and will return with a new flush of growth and flowers. I like to plant them in the spring has there have been some problems with frost heaving if planted too late in the autumn. Propagation is by division although some varieties to seem to seed (but not too much).

Yesterday I went and got a new printer. Since we are a Mac household (and business) I decided on the HP Office Jet 6500. It was on sale for $99 but the ink was $88 extra. They do give you some starter cartridges but they are only good for 35 pages.

Looking over the pictures I shot last fall there were quite a few from NYC. Here is a funny jazz band that we saw. The guy was actually blowing two trumpets at once and sounded good. After much searching I couldn’t find the name of this player. I did find several pictures of him with different ensembles playing in the same place in the park (near the fountain). 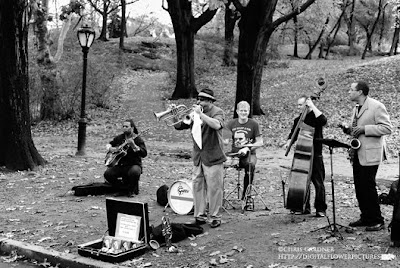 Larger Version Here
Posted by Digital Flower Pictures at 8:18 AM

I like Hardy Geraniums, have a couple and would you believe they are in full sun? So far so good....on the third year with one and second with the other.
Looks like a fun jazz group.

Isn't insane how much ink costs? I'll have to see how you like your printer; we're going to need one eventually.

The geranium is beautiful.

The geranium is lovely and have fun with the new printer!