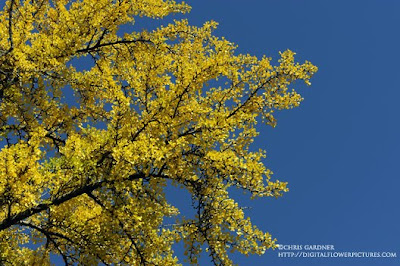 These pictures were taken at the New York Botanical Garden last fall. They have been lurking around on an old memory card. There are several cultivars (remember that means a culti-vated var-iety) of Ginkgo growing at the Estate and this one was featured on this site on September 14, 2006. Last fall we moved a couple of Ginkgos to an area where they will be able to expand. Luckily we have been dealing with the male of species, as I had never seen the fruit before.

The trees at the NYBG had a lot of fruit under them. There is supposed to be a rancid smell (actually its well documented) but I didn’t notice it. Not sure why but perhaps it was my excitement at finding a new botanical curiosity. Looking around for information on these fruits, which I think technically are seeds, led to a lot of confusion on my part. It isn’t simple but here is some of what I learned. The seeds can be eaten (in moderation) if you can get by the ‘aromatic’ smell of the fleshy outer covering. They are considered a delicacy in some Asian cultures. Be careful as handling the outer coating can give a painful rash to some people. Gingko Trees are sexed with only the female producing seeds. It can take up to twenty years until they start ‘bearing’. 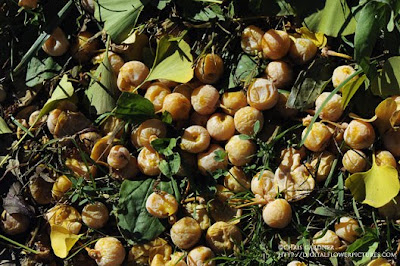 Sitting here the sights and smells of the autumn NYBG trip are coming back to me. The slanted warm sunshine, slight smell of decay and the rustling of the leaves all stand out now. This winter is going to get a little harsher around here over the next few days. Today’s forecast calls for a high of 22 degrees (F) and a wind of 10 to 20 mph from the NNW. Tonight is supposed to be 8 degrees Fahrenheit, which I think is around minus 13C. We got about 2 inches of snow yesterday. As bad as we have it here I do feel sorry for the people in the Southern United States. There is probably going to be a lot of plant material that doesn’t make it through the sustained cold temperatures. 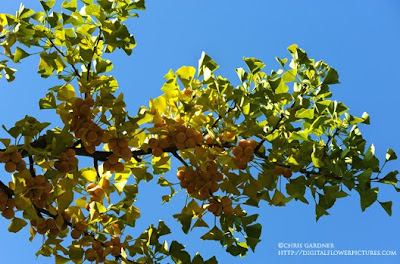 Posted by Digital Flower Pictures at 9:01 AM

I hope the South survives. It's frightening, these climate changes. They are a bigger problem than the idiots in the airplanes, I think. So many challenges. Thanks for your blue skies and beautiful photos.

Ginkgos are such gorgeous trees --especially in the fall. I had never seen (or smelled) the fruit until we were in NY at West Point, walking near the parade field....my friend and I looked at each other and YUCKKK!!! what is that smell???? Sure enough, loads of fruit from a female Ginkgo. I am surprised it didn't bother you. whoa!!

Glad you liked the photos. I think the south will be okay but some of the flower buds may not be.

I don't think anything was going to spoil my day. The smell didn't register at all.