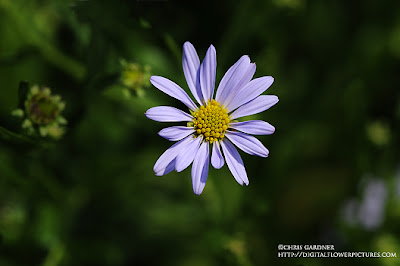 While I found these flowers to be beautiful it is always a little unnerving to see one of the “fall” flowers blooming. IT has been a strange year as the both the Asters and left over Chrysanthemums have been trying to bloom for what seems like months now. We have been diligently pinching the other plants but the Kalimeris escaped us. This is a under used perennial that is both hardy and carefree.

It can stand on its own or mixes well into a perennial border. Since it only grows to 18 inches tall it doesn’t need staking and is a free bloomer. Pinching it during the season to encourage bushiness and slow down the bloom time is really the only maintenance involved in the cultivation.

"Chide me not, laborious band!
For the idle flowers I brought;
Every aster in my hand
Goes home loaded with a thought."
Ralph Waldo Emerson

We really need some rain here. Earlier in the week we got teased with several showers but that's it. I was watching the raindrops hit the ground and bead up with no penetration. I was jealous as everyone I spoke said “Oh yes we had rain” but it didn’t come down where I needed it. At least the killer heat has broken and we are enjoying some nice summer days.
Posted by Digital Flower Pictures at 6:33 AM

Beautiful. I rarely see a blue flower. Nice one.