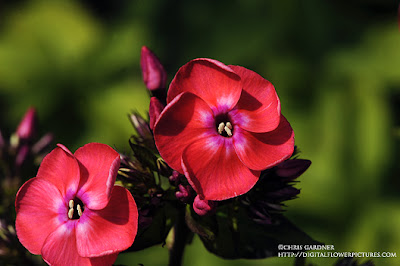 
Yesterday while picking up a some plants at the large wholesale nursery I grabbed a few photos of the perennials that were blooming. I used the 105mm macro lens and it seemed to be working perfectly. More and more I find myself manually focusing my camera even though the D700 comes with an astounding auto-focus system.

Since it is that time of year again the Garden Phlox was sure to make an appearance here. A true garden classic Phlox can form the heart of any perennial garden. On the plus side they are free flowering and generally don’t need staking. The flowers attract butterflies and sometimes hummingbirds. It is also a true summer bloomer. On the negative side is its proclivity towards getting powdery mildew. We have found that using resistant varieties (as this one is) and one application of fungicide early in the season goes a long way towards controlling the problem. The flowers are generally not affected but the mildew but it sure makes the plants hard to look at.

‘Junior Dance’ is a compact form of the Tall Garden Phlox. It grows about 18 inches tall. Like most of the Junior series it tends to branch laterally rather than upright. The color is amazing and one of my favorites in the garden. This variety was introduced in 2004.
Posted by Digital Flower Pictures at 7:55 AM

Listening to a Bill Withers movie, love it. (sorry--just a little random, but know you would appreciate it)
The one Phlox I brought with me is now blooming.... need to add more in the garden, what great colors.

Gloomy but beautiful. Perfect to grow this summer season.