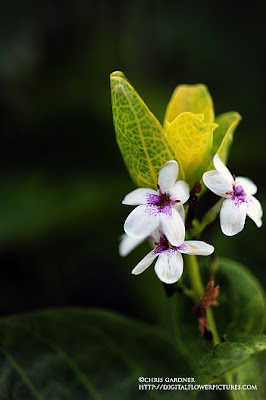 This is a flower that I saw for sale around here for the first time this year. It’s cute and dainty but the name is a mouthful. It is considered an evergreen shrub but certainly not in Connecticut’s climate. Although recent temperatures sure have made it feel like the tropics around here. The flowers of Pseuderanthemum are nice with their random pink spotting at the base and the foliage also adds some interest. The foliage emerges as kind of a chartreuse color and then gets darker. The gold veining is striking and unusual. I will have to try some in the future.

Since it is Sunday come join us at Today’s Flowers . 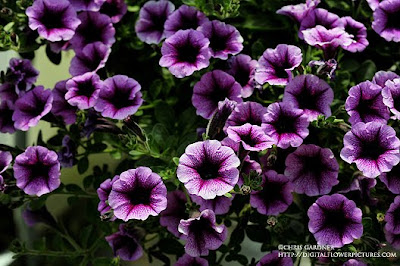 The Petunias seem to be holding up despite the heat and this group of purples was spotted in a hanging basket.

Our Butterflies “hatched” and are now flying around in their little enclosure. We put some flowers and sugar water in there for food. The whole thing started when we visited the Key West butterfly conservatory and Karen bought a kit that allows you to raise your own butterflies (after sending away for the caterpillars). When she got it I just assumed it was going to be one of those things that you don’t finish but she did it and we now have 4 Butterflies, which I am on the record for releasing.
Posted by Digital Flower Pictures at 8:42 AM

A plant new to me, what a pretty little thing. Thanks for sharing.

The golden Pseuderanthemum is called Gokarna Jasmine here, although it is not a jasmine. It flowers profusely throughout the year. The bush is small and compact.