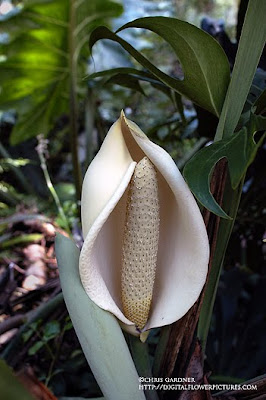 This beauty was growing inside the conservatory at the Brooklyn Botanical Garden . It is an amazing set of buildings that can easily send you on a journey past the gritty streets that surround it. Pretty much everything was in great condition at the garden. I didn’t stay too long as all the walking made me tired. 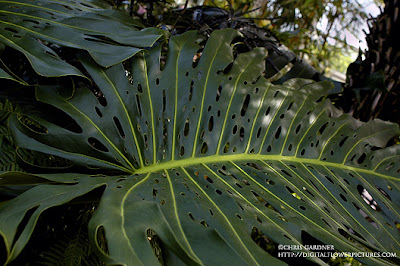 Huge and bold foliage of the Monstera

My day started out getting all my gear ready. This is a list of what I took:

I purposely left out the two lenses I use the most the 60mm/2.8, and 105mm/2.8 (both Nikon). The thought was to try and see things a little differently than my “crutch” lenses. Although I missed both of them. I put the 80-200 on the D70s and the 50 on the D700. One good thing about the 50mm is it is very inconspicuous. After gearing up I drove the 25 miles to the train station. Metro-North trains come a lot closer but the Katonah station is nice and it is easy to park. Soon I was zipping by the towns of Westchester County like Hawthorne, Pleasantville, Chappaqua and White Plains. I had a playlist for Selena Gomez and Christina Grimmie’s new CDs. Both of which are excellent.

The train left me at Grand Central so I went into the subway and got on the 6 train going downtown. After changing onto the ‘Q’ train at Union Square I was headed out to Coney Island. That's when the memory washed over me. When I was 15 or 16 I was supposed to go to Coney Island with the girl I liked then. Her name was Sandy and she was beautiful. The trip was all planned and at the last minute Sandy backed out. She blamed her mother, which knowing the woman was probably true. Sadly I never made it out to Brooklyn that day. Sandy and I did end up going out for a short while. She was a sweetheart.

As the train rumbled through the dark tunnels every once in a while breaking into brilliant sunshine on the elevated sections it cut across the heart of Brooklyn I had sometime for quiet reflection. Was I some how trying to relive the trip not taken 33 years ago? What happened to Sandy? All this was accomplice by the discography of The Byrds I had loaded unto my Ipod last week. I was struck by the lyrics from the old country song, “Roger McGuinn had a 12 string guitar. It was like nothing I'd ever heard.” His 12 string does have an amazing sound. During my contemplation with the sounds of the 1960’s ringing in my ears a beautiful woman came on the train and sat next to me. I almost asked if her name was Sandy but instead just sat quietly admiring her beauty.

Soon it was last stop the Coney Island/Stillwell Avenue station, which is modern and architecturally pleasing. I made my way to the boardwalk and marveled at all the new rides and some of the old ones. I also visited the New York Aquarium whose entrance is right off the boardwalk. After some pictures and viewing the scenery on the beach it was back on the train to the Prospect Park stop to visit the Brooklyn Botanical Garden. Upon leaving the station the garden entrance was about a block away.

It was a beautiful summer day. The best thing was there wasn’t a lot of humidity, which can ruin summer around here. After visiting the Lotus Pool, Annual garden, Café, Conservatory and rock garden I was done. Back to the subway for the long ride to the 42nd Street/Time Square station. After that I jumped on the Grand Central Shuttle and caught the train to Westchester. Over all it was a great day. Two world-class attractions in one day. I will be posting some more pictures during the week.

Come join us at Today’s Flowers . Flowers from all over the world.

Sunday means bonus picture. Shot with the 80-200mm lens and D700. It was easy to do a back portrait when the flower is 7 or 8 feet off the ground. It is one of the Hardy type of Sunflowers but I didn’t get the name. 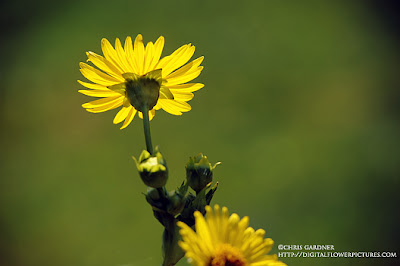 Sounds like you had a great day, love the flowers and the huge monstera leaf. Beautiful photos.

It's the first time I've seen the Ceriman. So unique and lovely. Thanks for sharing.

Great photos and a great read. Thanks for taking us along, I loved your trip down memory lane too.

The Byrds brought back a nice memory for me, only my memory was of a Jim and not a Sandy. Hey Tamborine Man was my favorite song that summer. I enjoyed your ride, and your flowers. Love sunflowers, but enjoyed meeting the Ceriman.

A sentimental walk down memory lane and beautiful captures to complete your day. Hope you meet the 'Sandy' of your dreams to share the rest of your life.

I have a nice memory of that same trip to Coney Island, different circumstances though. My son, my brother and I headed to the Aquarium several years ago on a day it was 104 in NYC. I loved seeing another part of the city I was not familiar with, especially going through a very green and leafy Brooklyn.