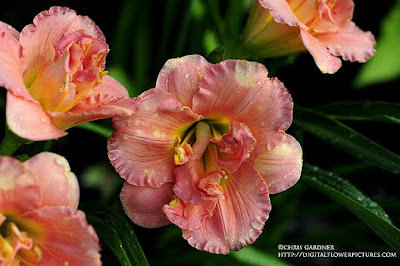 Last year we bought a box of 100 Daylily seedlings and planted them around the yard. Everyone lived and thrived and this double peach colored one is one of my favorites. The Daylilies fit perfectly into what I call Chris’s Garden of Castaways. It is primarily made up from over orders, rehabilitation projects, cast offs and other rejects. The cast of characters are starting to come together nicely but always with the idea of what I can dig up and sell later.

This Daylily, which I thought might be 'Siloam Double Classic' but doesn’t have enough pink, has been blooming for a week now. I decided to step back and take a picture of the whole flower scape now that it has 4 flowers out. The plant is sufficiently large enough now to be divided after it finishes flowering. 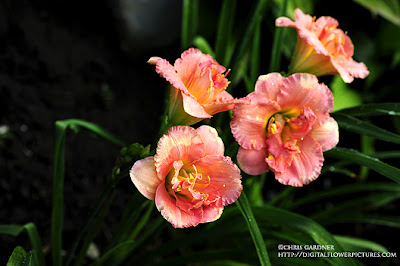 I was calling this a ‘double’ Daylily because of the extra petal but the more correct term is “polymerous” (def.: having or consisting of many parts). Under either name the extra petals add a lot to the beauty. The flowers also have a pretty strong scent, which is refreshing and heady.

Daylilies are considered one of the most hybridized plants. With 60,000 registered cultivars and 100’s more being added every year there is a mind-boggling amount to choose from except no blue flowers but I am sure they are working on that. They are hardy from USDA Zone 1 (which goes down to -60 deg. F) up to Zone 11. Hey are very adaptable in the garden and the only problem that crops up is the deer like to eat them. The flowers are edible and often used in Asian cuisine.

On Sundays we have a bonus flower and today its is a Wild Daisy from work. It is basically a weed that has resisted every campaign to eradicate it from the garden. It looks all innocent in this picture but is a heavy seeder that can be a little frustrating to deal with. 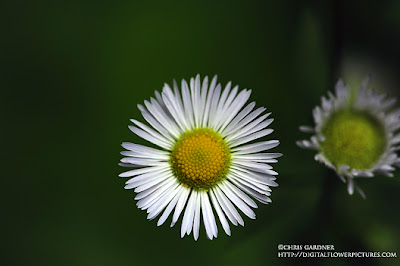 After having the 60mm macro lens glued to the end of my camera for what seems weeks I broke out the 105mm/2.8 Nikon lens and used it on these photos. It is a great beast of a lens but is also great on capturing light and shadows.
Posted by Digital Flower Pictures at 8:57 AM

Today's Flower at my end, hope you can drop by,. Have a blessed Sunday!

Oh. My. God. I didn't read your post. I couldn't. I couldn't get past the photos. For once, I reveled in my limitations.

I love the double daylily! I always see the single ones around here. The little daisy is so cute! I can see that it would be hard to be sufficiently ruthless with it!