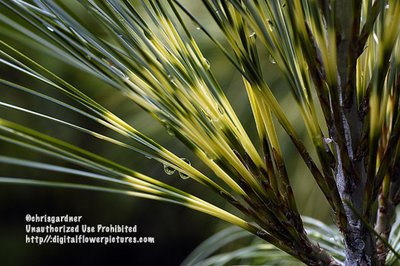 This graceful pine tree is a striking accent in any garden. It was formerly know as the Bhutan Pine, but is now called Blue Pine. I have heard it called Himalayan White Pine also. I remember when I showed a friend, who I highly respect as a gardener. He said, “You will never be able to grow that in Connecticut.” Thankfully he was wrong, and the tree has flourished. I later found out this tree is quite hardy. It has beautiful variegated needles, which are gracefully pendulous.

This tree can get quite large; however, with careful pruning, I have kept mine at about 12’ for the last 7 or 8 years. I would recommend it for a mid to large size garden.
Posted by Digital Flower Pictures at 7:03 AM

Email ThisBlogThis!Share to TwitterShare to FacebookShare to Pinterest
Labels: Variegated