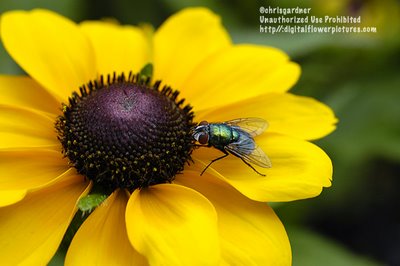 While visiting a friend’s garden, he was raving about this plant. It was planted in front of some taller ‘Rustic Colors’. It did indeed look nice. I took a couple of pictures of the flowers and this one came out the best. The Green Bottle Fly was extra; he landed on the flower a second before I fired the shutter. I looked up the Bottle Fly and it turns out that it does act as a pollinator on some plants. A little research on ‘Toto Gold’ reveals there is another cultivar called ‘Toto Rustic’. Both look like they are worth a try for next year. I will have to look around during the fall and see if it can be acquired.

Rudbeckia is native to the Central and Southeastern United States. It is one of three genera that are commonly referred to as Coneflowers. There are about 25 accepted species within Rudbeckia. It is also the state flower of Maryland.
Posted by Digital Flower Pictures at 6:43 AM