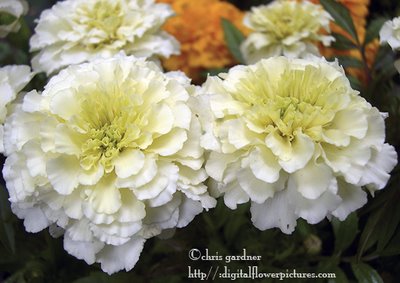 Having enjoyed the cultivation of this African Marigold I thought I would share it. Far more than a novelty item the White Marigold is a stand out in any garden. I do admit to enjoying the novelty factor a little bit. They are fun to grow. I haven’t tried growing them from seed but I usually always try and get a couple of flats. ‘Sweet Cream’ flowers are actually off-white and the plant grows to a stubby 8 inches. That is much smaller than the other White Marigold I have grown called ‘French Vanilla’. That is also a nice Marigold to grow and I found this story about ‘French Vanilla’ on Burpee dot com;
“As part of its longtime search for a true white marigold, Burpee launched a national contest in 1954. The $10,000 prize for the seed of a truly white marigold was finally awarded to an Iowa gardener in 1975.”

I would recommend either of these cultivars of Marigolds. I like Marigolds in general and that is partially because it is easy to get a big show without too much work. One time I planted Striped Marigold with the whites and even though that was an odd combination it worked. One more thing, White Marigolds don’t smell like regular Marigolds, they don’t smell at all. While I don’t find the fragrance of Marigolds objectionable I guess a lot of people do. 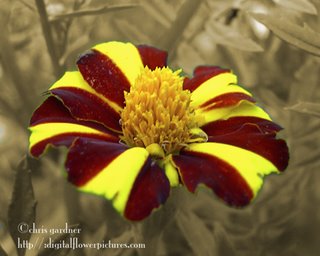 This is a Striped Marigold
Posted by Digital Flower Pictures at 8:03 PM

Email ThisBlogThis!Share to TwitterShare to FacebookShare to Pinterest
Labels: marigold

Beautiful photo of the white marigold, I remember when burpee first came out with it, it was quite the accomplishment, I have not grown it in several years, your photo makes me want to again :).