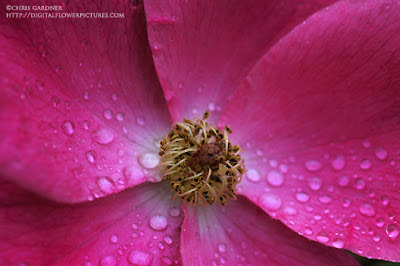 Another one from the FDR Rose Garden in Hyde Park, NY. I must admit I have seen this rose before and didn’t think much of it. However is really struck me as a pretty rose on Saturday. It was one of the most prolific blooming roses in the garden, it was also one of the tallest. It’s funny I have been posting so many pink roses. I thought that they were my least favorite but I guess I have been enjoying them while growing them, photographing and posting them. Also the fact that this rose has only 5 petals and a solid color is something I normally would say is ‘plain’. Those attributes are becoming more attractive to me. Beauty in simplicity. The first picture benefited from a quick rain shower. 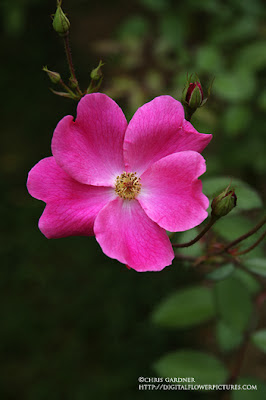 “Betty Prior’ was bred in the UK by D. Prior & Son in 1935. Jackson and Perkins introduced the rose to the United States in 1938. So it is a rose of FDR’s era. It was considered, at one time, to be one of the most popular roses in the United States and judging from the amount of times I have seen it, ‘Betty Prior’ is still very popular. Among its good traits are a nice fragrance and hardiness to USDA Zone 4. 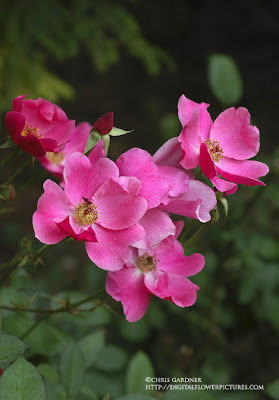 Also available as a Tree Rose and a Climber. The climbing version was developed in 1995 by Donell Cooper in 1995 and is a sport of the original ‘Betty Prior’. In case you don’t know what a botanical ‘sport’ is the definition is:
“An abrupt, naturally occurring genetic change resulting in a branch that differs in appearance from the rest of the plant, or, a plant derived by propagation from such a genetically changed branch.”
Posted by Digital Flower Pictures at 6:01 AM

I've always thought these were missing some petals but I guess that is the way they are supposed to be!
FDR's summer home (the little white house) is near here. I love to go visit in that area but I can't remember if there were any roses.
You take such beautiful pictures!

I've always loved the simplicity of 'Betty Prior'. Your pictures have captured its' charm!

this flowers are really nice. and the photos are made good too.

Interesting. Any relation to rose hips?

If this is the same as the flower that used to surround the pavilion at Sherwood Isle in Westport, I love it well!

Beautiful photos. Thanks for bringing to mind Hyde Park. That's a must-see for my daughter.

Hi dot, I didn't know FDR had a place down your way.

layanee, I am with you on the simplicity. I think I will try one or two of 'Betty Prior' in the big Rose Garden I am tending to next year.

hoto, I haven't seen you here before. Thanks for speaking up and leaving a comment.

I am not sure if this rose gets a lot of hips or not. It probably has more than the modern roses usually featured here. It will be time to harvest them soon as it best to get the hips after the second frost.

I would certainly recommend Hyde Park. I had forgotten about it until I started working on the farm up there. There is a lot of history in Dutchess County.

Loving the first one. I must say that I am becoming a fan of yours, you have great, brilliant shots!

I will surely come back over and over again to look at these amazing photos.

These are very good photos. I bought 3 Betty Prior rose's 3 years ago and planted them on Mothers Day. My Mothers name is "Betty Prior" I would love to have more info on these rose's.

Chris,
Are you aware that someone named Aster Max has taken one of your Betty Prior photos and posted it on Flickr as his own? I've had two of my own photos taken by him and posted on his Flickr stream and he persists in saying that the photos are his. Contact me if you want to know more.

You have to assemble it yourself. Thanks.

Thanks for the tip. I am going to email you for some more information.