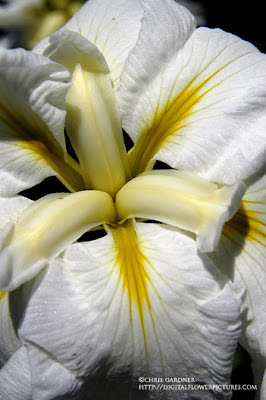 If you are here for Wordless Wednesday scroll down to the next post.

I originally planned to have Impatiens as my ‘ABC’ photo but I was foiled as when I got to work on Tuesday I found I had forgotten my memory card. Duh! I usually keep extras in the truck but since I have been out shooting a lot they are filled up. The one that I had ‘cleaned’ was sitting on my desk. I might invest in a couple of larger cards so they don’t fill up all the time. Since I do shoot a lot of pictures (shush, I should be working during some of that time) I have to periodically go through my hard drive and get rid of the pictures I am not going to use. That is what happened when I came across this Iris picture. I figure if I haven’t used a picture several months after I shot it then it is toast.

My workflow starts with Adobe® Bridge, which now that I have gotten used to it I love it, and I remove any clunkers from the card. I often pick out the picture I am going to use that day and open it right in Photoshop and then resize it and save it to my hard drive. I have always wanted this blog to be of pictures and plants I shoot in the days before the post, which doesn’t always happen but enough to keep true to the original philosophy. I then download the remaining pictures with Nikon View. That is a pretty worthless program for anything other than a camera/computer interface. Even though I have 3 hard drives in my machine, totaling 344 GB’s I am still sensitive to storage concerns. I don’t want a lot of extra pictures so I try and clean house every so often. I write DVD back ups every two to three weeks.

After I choose a picture I use Photoshop CS2 for any contrast, level and cropping adjustment. I wrote an action that automatically resizes the photo and puts the text watermark on. That saves a lot of time. I save the picture and then upload it through Blogger. It is not as complicated as it sounds once you get used to it. I do try and tweak the process but this way seems about the best for me.

So after all that boring technical stuff let’s get to today’s flower, the Japanese Iris. The Estate I work on has a large collection of these Iris. It is quite a sight when they are all blooming at the end of June and beginning of July. That is a month after the Bearded Iris have bloomed. There are probably 30 or 40 different cultivars. Most are not named or I have forgotten them. I did buy 25 kinds for 25 bucks once and none of them had names but quite a few were very special. If Tall Bearded Iris is the King of Irises I would have to say that the Japanese Iris is the Queen. The colors and size of the flowers are more appealing to me. Some of them are larger than your hand (largest flowers of the Iris family) and I like the way that they are a little flatter that the other Iris. They are easy to grow and withstand normal to very wet conditions. A lot of mine are growing on the edge of the ponds and if you want to remove them for the winter you can grow them in shallow water. 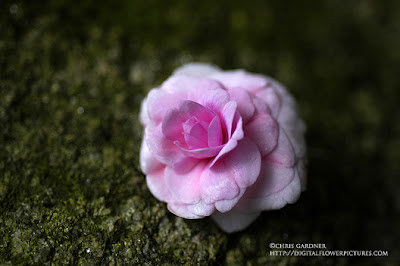 I am going to post this picture of a Rosebud or Double Impatient. It just didn’t come out as well as I had hoped and I had planned to reshoot it yesterday. Impatiens are another flower that I love to grow. The new varieties and types that come out each tear are astounding to me. This one has variegated foliage so it really lights up a shady corner.

Here are some of the other blogs that are participating in ABC Wednesday. If you want to join let me know and I will add your link.

Posted by Digital Flower Pictures at 5:36 AM

Another stunning picture! I never expect anything less from you.

I love Jap iris! I also enjoyed reading about your process you go through, do you shoot raw? I took a class in it last year since I need it for calendar work, but heck I dont want to spend so much time at the computer!
Oh, could you please add my blog Mollitudes to your roll of abc?
both blogs have their I's ready and willing to be viewed!
Jean

Stunning Iris photo, Digital flower picture. You set the bar high for photography, you do. It's art you do whereas I often resort to mere snapshots.

These are very beautiful flower pictures. My parents in law have this huge flower garden every year, everytime I am visiting, I just keep takeing hundreds of photos. I love taking macros, and any bugs that land on the flowers. You have nice blog here, and thanks for visiting my blog, and commenting. Anna :)
PS I guess you play piano too, and guitar. I did play guitar in highschool and unfortunately collects dust now. May be one day I will pick it up again, lol.

I don't know , forgetting memory cards, i would never do that. It was a good job the last time i did i was only 20 minutes away so i could come home.
As with hard drives i think it wont be long before i have to use a terabyte one.

Beautiful photos and you certainly know your way around digital photography, adobe etc.

Love the composition of your pics. I have been struggly for weeks to get a decent picture of an iris. They seem so unphotogenic when I try.

Thank you for another wonderful flower shot. I am especially interested to see your workflow. I will come back and study again. I wish I have your photoshop and your skills to go with it.

Thanks everybody for visiting and taking the time to leave a comment.

To everyone taking flower pictures. Keep trying! It sometimes takes awhile to get some good ones. Remember that I often take a lot of pictures that don't work out (I just don't post them here). I try and learn from that experience and try to do better next time.

jean, I do shoot both jpeg and raw. The jpegs are easier to process so I sometimes default to that. I will try to remember to add Mollitudes to the list. I enjoy that site.

ruth, I hope you see this. Your site has been crashing Firefox so I have been unable to visit your site and leave a comment. It is a real bummer.

Hin, you do pretty well with what you got. I was lucky to get a good deal on the Adobe Graphics suite. My friend is an Adobe dealer. Actually, was, he just passed away in July.

mark, nice to 'see' you. I am glad I'm not the only one to forget. Lucky that hard drives are getting cheaper and cheaper over here.

I have a Double Impatient, it has plain green leaves though, it's one somebody bought me last year, I could perhaps make it one of 'Bob's Colourful Bloomers' some time. By the way, I hope the lawn picks up again soon. Bob.

DFP - You stun me with your knowledge of technology. I tried Tiffs at one point but the file sizes were horrendous and my PC at that time was very, very slow - so not a good experience.

I love your Japanese Iris but I may be prejudiced since my future daughter-in-law is from Japan and she has great passion for flowers.