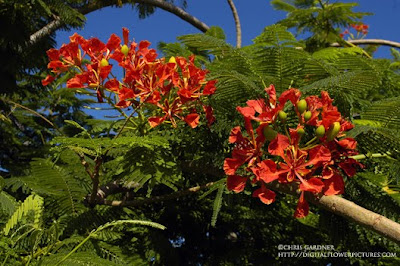 To me this is one of the beautiful tropical trees there is. In 2007 I posted the modest goal of wanting to see this tree and the Jacaranda Tree in bloom. Now one of the trees can be checked off the list. We saw several Royal Poinciana in flower on Maui. There was one tree that literally looked like it was on fire. It wasn’t till I found this tree blooming in a parking lot in Paiai, which bills itself as Maui’s Coolest Little Town, that the flowers were low enough to get photographed.

The tree is graceful and beautiful in every way. The shape is stately and the foliage is a great color green and nicely shaped. The flowers have wonderful details and also give an amazing appearance from far away. The long and flat pods looked like they wouldn’t be great to clean up but they are attached to tree they look good and add more detail to the look of the tree.

This next photo is the Reefdancer in Lahaina. It isn’t actually a yellow submarine but a glass bottom boat. The song by the Beatles was going through my head the other day and it was frustrating that I couldn’t remember the words so I had to look them up. Something I didn’t know was the song Yellow Submarine was actually released on the Revolver album in 1966. The Yellow Submarine album was the soundtrack for the film. The film was freaky for its time and had some animation effects that were really cool (again for 1969). 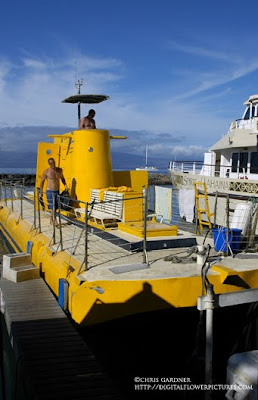 Both of these pics were taken with the D70s and the Sigma 24mm/1.8 lens.
Posted by Digital Flower Pictures at 9:22 AM

I loved Yellow Submarine and saw it when I was about 10. The images are still fresh.

That's a wonderful, fun movie. The flower is gorgeous. That's some incredible color.

Love the Yellow Submarine......have it on video? or is it a DVD...will have to look. Interesting tree. Love the common names.