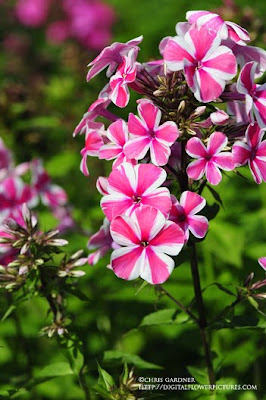 The ‘Volcano’ series of Phlox was featured on this blog here. This one looked pretty amazing and better than the striped Phlox featured on this post. It had a much larger flower and was a darker pink.

I really have to try and get some of these Volcano Phlox next year. All of the Garden Phlox was so beautiful this year. With the cloudy days and rain we had all season you would have thought the mildew problems would have been worst than ever but that wasn’t the case. They stayed beautiful and only got a little disease late in the season. There was one called ‘Bright Eyes’ that was still blooming yesterday. We were religious in cutting back the spent blooms.

It certainly renewed my faith in this star of the perennial border. If it hadn’t been so late when I spotted this striped one it would have definitely been in the garden. I probably should have just gotten them anyway.
Posted by Digital Flower Pictures at 5:36 AM

For some reason Phlox was not in my garden palette. Here the Creeping Phlox is used frequently and looks blah in the summer. Am hoping to use Phlox paniculata more and more. Great bloomer and this striped one is really pretty.