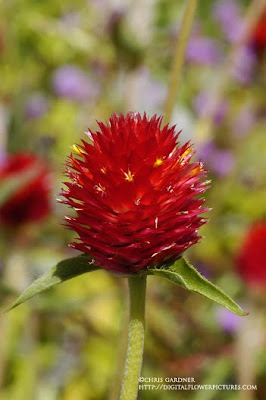 This is the first year in many that we grew Globe Amaranth and the first time ever for the brilliantly red colored 'Strawberry Fields'. This flower’s brightly colored bracts seemed to bloom all season and performed well in a hot and dry border and containers. It got up to about 24 inches tall and did flop over a bit although the flopping plants and flowers were still graceful. I would recommend it as a free flowering low maintenance annual. 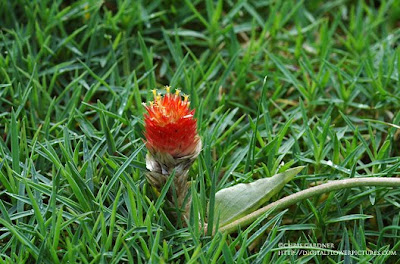 Previously we had only used Gomphrena globosa and that always had done well but this plant is a bit different (different species). The red Gomphrena flowers can be used in arrangements and dries as an everlasting.

Since yesterday a Yellow Submarine was featured here I though it was funny Strawberry Fields is today. The Beatles song ‘Strawberry Fields Forever’
“was originally intended for the album Sgt. Pepper's Lonely Hearts Club Band (1967), but was instead released in February 1967 as a double A-side single with Paul McCartney's "Penny Lane". "Strawberry Fields Forever" reached number eight in the US, with numerous critics describing it as one of the group's best recordings. It is one of the defining works of the psychedelic rock genre and has been covered by many other artists. The song was later included on the Magical Mystery Tour LP (1967).”
From Wikipedia

I know it blew me away the first time I listened to it. Since it is Sunday and that means Today’s Flowers here is an extra shot of an Orchid from work. It was a gift to the garden’s owner and it didn’t come in with a tag. It has been blooming for weeks now. 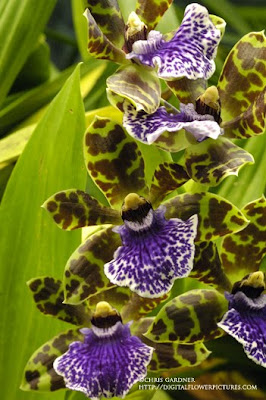 For more flower pictures from around the world check out:
Today’s Flowers . The links open at 1400 GMT.
Posted by Digital Flower Pictures at 7:53 AM

Wow the orchids looks new to my eyes. I haven't seen them before, the stripes are very extraordinary.

BTW thanks for telling me the name of the flower, now I know it and I won't forget it.

Thank you for telling me the name of the flower (Gaura lindheimeri - Prachtkerze) wich I posted today. I did not know its name, although you could see this flower on all the public flowerbeds this summer. Vienna's Stadtgartenamt (MA12, a department of the city administration) planted them everywhere, and they looked very beautiful.
Your picture of the Orchid looks great, I love the colours very much!
Have an nice week ahead!

Wow - what a gorgeous orchid! Beautiful colors! The first really looks like a strawberry! Yummie!

Wonderful and beautiful Orchid. I love the colour combination too.
The Globe Amaranth I planted last spring in my garden, excellent palnt.
- Cheers and thnak you for your comment.

I love the gomphrena flower!

Mine are local flowers in the Land of the Morning Calm.

Beautiful Globe amaranth but the orchid is simply stunning - and how generous of it to keep on flowering!

Hi Chris, sorry I was late posting for Today's Flower. Try again! Thanks for the reco about Globe Amaranth. I might try that one.

You have a beautiful collection of flowers here. Now I know what the first flower is called. Thanks and have a nice day.

Really nice orchid! And, I love them so! Beautiful post for TF!

Oh my, I love that first shot of the Amaranth!
The color is bright and vivid and the muted background is perfect!

Lovely floral photos ... hard to choose a favorite! Thanks for dropping by mine. I appreciate your visit and comment ;-)
Hugs and blessings,

Fantastic shots. Beautiful color
of the orchid flower and the leafs are great too.

Thanks for visiting me

Have a nice day
Gunilla

Those are both gorgeous flowers. I like the variety of orchid so much and the first one is such an unusual bloom.

what a gorgeous orchid and beautiful colors! The orchid is my favorite

I LOVE the orchid! The globe amaranth looks like a winner too.

What a stunning flower the globe amaranth is. I must find a place for it next year. fabulous song too Your orchid is so beautiful.

Both of your offerings are very nice, that orchid is special.

That's a lovely red.
The orchid seems to have a mustache!

what pretty flowers and both unusual....

lovely orchid. I have one similar to that..

Your Orchid is a Zygopetalum and needa more water than most orchids would tolerate, just not on the leaves otherwise they will develop unsightly dark spots.

I love it... really made my day... your visit is indeed a blessing... hope to hear from you God bless!

Indeed it look like a Globe.
Nice and beautiful colour.