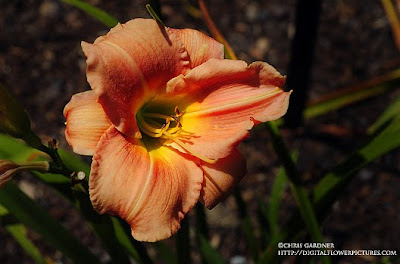 There will probably be a few more Daylilies posted here since I have been going through some more files. Daylily time seems so far away right now. The plants in my yard have been taking a beating from all the snow. Most of them can’t even be seen but the ones sticking up look bent over and in some cases broken.

Yesterday my cell phone broke so I upgraded to a smart phone, the Droid 2 Global. I have learned how to turn it on and make a call but there looks like a steep learning curve for the rest of all the stuff it can do. Putting in all the passwords and bookmarks is going to take a while. We also shoveled the roof off again yesterday. We tied safety lines to the chimney and got it done in a few hours. Lucky the lines weren’t necessary but it was nice to know they were there.

Today I am heading down to Manhattan to pick up Karen’s repaired camera. Just for fun when dropping off the camera I asked if they could fix a 18-70mm Nikon lens that had a big scratch in the front glass. Good news! They replaced the front element and checked it out for $60. The lens is nice one but it is a cropped sensor type so it won’t be used for the D700 (which is full frame). It originally came as the kit lens with the D70s. The 18-70mm lens, which is described in more detail in this 2008 post. It is going back in the camera bag.
Posted by Digital Flower Pictures at 6:59 AM

Everyone loves to receive flowers. Give loved ones the gift that will last forever and not wilt away in a matter of weeks.
Flowers

I think if we had cell service in our new house on the lake, I would have a Droid or Droid 2...whatever. Took some getting used to, but I seldom have my phone on me anymore.
I can't imagine shoveling snow off the roof, brrrrr. Would you unfriend me if I said we took a walk along the lake shoreline today after washing the cars and giving three dogs a bath-- outside. It got up to 70 today, will again tomorrow.
Good luck with your new phone, maybe one day we will have service and I can get a new phone.
ps- beautiful lily.