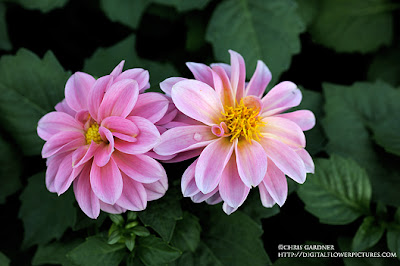 For the first time we are growing a few Dahliettas in the Dahlia garden. This dwarf pink is doing well and already had quite a few flowers. The final size is 8 inches tall by 12 inches wide, which makes it perfect for under planting the bigger coarser Dahlias. The Dahlias in general have been growing slowly, they probably want more sunshine, but have been producing buds and flowers at an acceptable pace.

Getting things for the cutting garden was really difficult this year. I guess most of the cutting flowers don’t make great bedding plants so they got cut by the growers. I did manage to get some Zinnias, Cosmos and some Celosia. It didn’t come out as envisioned but should be okay for the season. We will add things if they become available later in the season.
Posted by Digital Flower Pictures at 6:30 AM