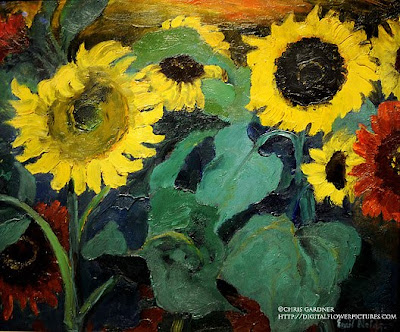 As a change of pace here is a painting from the Metropolitan Museum of Modern Art. The subject and amazing brushstrokes prompted me to photograph this painting. Mr. Nolde was considered to be one of the first Expressionists and often used bold colors in his floral works. His flower paintings were said to be based on his love for the art of Vincent Van Gogh.

It is really difficult to photograph paintings in a museum although the Moma does not really have any restrictions other than no flash and no pictures in certain galleries. Getting the angle of the lens ‘flat’ on the canvas is the hardest thing for me. If you don’t, you get all sorts of distortion on the perspective. Some of those can be worked out in Photoshop but you basically have to have close to right in the camera. This photo was shot with my all time favorite lens, the Nikon 60mm/2.8 macro and the D700 camera

The weather finally broke yesterday after a couple of days of 100+ degrees. A line of violent storms rolled through at about 5 pm. We were lucky at home not to have much damage but several neighboring towns had a lot of damage including trees down, no power and roads closed. While it is still humid here at least we won’t have to deal with heat. The forecast calls for a much more comfortable 81 degrees today. Just in time for the weekend.
Posted by Digital Flower Pictures at 6:40 AM

Email ThisBlogThis!Share to TwitterShare to FacebookShare to Pinterest
Labels: sunflower