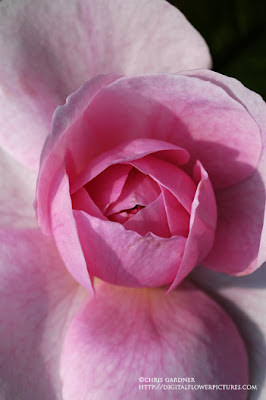 If you’re here for Wordless Wednesday that post is below this one. Consider joining us for ABC Wednesday. It is open to all.

I always feel a little (tiny, really) twinge of pride when I post a flower that I have grown and photographed. This is growing in the Rose Garden I am tending to on a large farm in South Salem, New York. This little beauty was tucked way in the back but still blooming nicely. There are several large shrub roses planted in the back and before I pruned them they were pretty much snuffing this rose.

I am glad that I uncovered this one, as it is a beautiful clear pink with a luscious very strong fragrance. Another one of David Austin’s English Roses it is a cross between Wife of Bath × Comte de Chambord. I must admit that previously I have turned my nose up on Austin Roses and shrub roses in general. I had been favoring Hybrid Teas but the Grandifloras and Floribundas had been creeping in among my favorites. The Austins have been winning my heart though. As a gardener I should know better than to dismiss classes and types of plants but experience and observation is a great teacher. I had several posts about David Austin’s Roses on this blog.

‘Graham Thomas’, ‘Abraham Darby’ and 'Crown Princess Margareta' are just a few of the beautiful David Austin roses I have been enjoying.

Gertrude Jekyll was a famous garden designer from Surrey, England if you haven’t heard of her. Here is a link to more information on her fascinating life:
Click here.

One thing I learned about Miss Jekyll that I didn't know before was that she was a very accomplished photographer. That must have been tough to do in her day. I have two small connections to Ms. Jekyll. When I lived in Weybridge, Surrey it turns out to be about 30 miles from her area of Surrey. I certainly could see how that would inspire one to be a gardener. The other connection is my parents lived about a half mile from the Glebe House in Woodbury, Connecticut. I am pretty sure that the garden there is the only surviving Gertrude designed garden in the United States. I will have to take a drive up there is weekend. 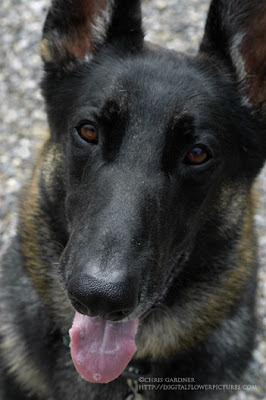 Okay, in honor of our ABC Mentor, Creator and Guru I am posting this picture. It is Luca, a very special dog. He lives at the farm and visits with us gardeners often. He comes out with a big bluster of barking and teeth but is soon trying to cuddle up to you. He always has an eye on what’s going on but has time to play with your gloves, fetch a stick or just hang out. He is training for herding, which I don’t remember any German Shepherd that I have known actually doing any herding or shepherding. I think him and Wilma would make some beautiful puppies. He is quite handsome and loves to pose for pictures. I took about a dozen of him and all but two came out so it was difficult to pick. I did have to show those ears, though. They are something. 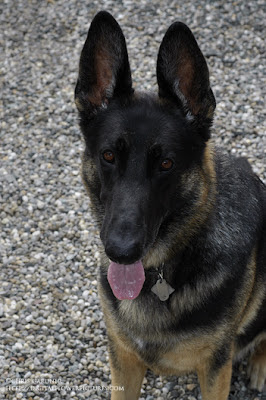 So, 'G' is for Gertrude, German Shepherd, and as Mike pointed out Grand Central 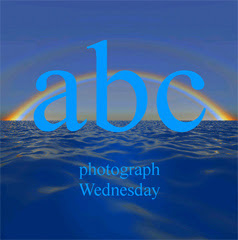 Here is another photo I took in Grand Central on Saturday. Humor me while I work on my Black and White Photography. 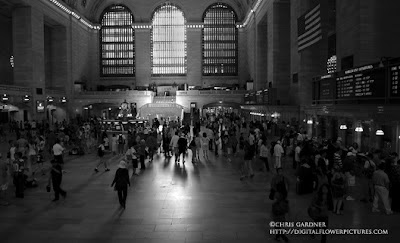 Posted by Digital Flower Pictures at 4:58 AM

Wow, what a lot of 'G' you packed in this week. The rose, as ever, is just beautiful. Luca looks absolutely adorable and the black & white shot is pretty good too.

The photo of the rose is stuniing, clear, well focused with great colour rendition.

I too have joined ABC Wednesday

The rose is beautiful. Gertrude Jekyll was one of the great gardeners. I do love your Central Station photo. Very atmospheric. Happy WW

What a superb post DFP.
The rose is a beauty, I love those open petals. My old garden had quite a variety of roses and I miss photographing them during the summer months. I love the name Gertrude sadly I imagine it's a name that will die out in favour of the more modern favourites.

I'm rather frightened of big dogs so it's nice to read that Luca is a friendly type beneath the strong exterior. :)

Grand Central station was in a film I watched the other night -'The Recruit' with Al Pacino - but that's only one of many movie appearances isn't it.

Enjoyed my visit. Thanks!

Of course, you know I am going to love g for german shepherd! Luca, I like the name and he is a beauty!
Jean

What a beautiful rose - enjoy a "sniff" for me!

I like the black and white Grand Central Station - your shot is timeless!


Well done on all!

the dog or shall i say, German Shepherd's ears are real pointy and long huh...

and great close up shot of the Rose.

GEE! what a fabulous assortment of G's :o) I especially like the black and white photo.

German Shepherds are my favorite dog. Gertrude is beautiful! Love your other photos also.

I always like to see the flower in your blog especially those grown by you. I may have read too fast!!! The pink one is a beauty as I see the rich pink color fading out from center to the outer edge.

The german sherperd is a beautiful animal and I want to give her a hug as I read through your post. And I love the b&w grand central in your post, I actually prefer your b&w as it has magical and imaginative interpretation in the vivid busy lives running in the photo.

Oh, those are some ears alright--I just want to give him a good scritch behind them--and by the looks of it, he might not have quite grown into them yet, either. :)

I guess Luca is a big hit. If you got to meet him you would like him even more.

How do you find out which letter of the alphabet is connected with each Wednesday, please? Lovely photos and informative words. Thanks.