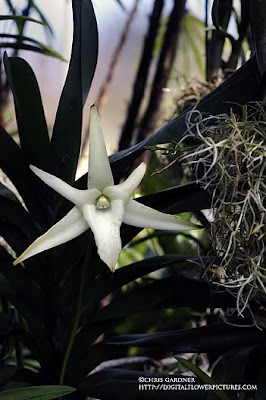 This isn’t the best flower picture I have ever taken but I thought people might like to see this rare and unusual beauty. It’s discovery shook up the botanical world at the time because of the lack of a known pollinator. This orchid is native to the lowlands of Madagascar where it attaches itself to trees at the edge of the forest. 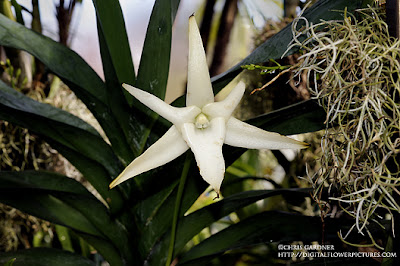 Angraecum has about 200 species of plants associated with it. That makes it one of the largest groups of African Orchids. It is easy to cultivate (if you can find it) but needs a lot of space because of its size. It blooms on December and late winter, hence the Christmas Orchid common name. The plants prefer a little shade and no direct sun. It needs good draining medium that is kept evenly moist. Generally conditions similar to Cattleya.

Since it is Sunday here is today’s bonus flower. 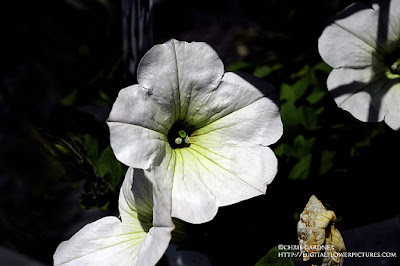 Any of the Supertunias are usually a good bet. They grow well and seem to be able to shake off any bad weather. This one has a bit of green near the center but you really can’t see that unless looking up close.

Last night I went to see British Blues/rock guitarist legend Robin Trower. Even at 60 something he was pretty amazing. The last time I had seen him was in 1976 at the Palladium in NYC. It wasn’t as loud this time thankfully. Of interest to me at this concert was the warm up band the Matt Schofield Trio. He is a great guitarist and the trio had a organ player that doubled as the bass player (he was pretty amazing). Its nice to have a local concert venue that gets good acts. The concert was about 15 minutes from my house.
Posted by Digital Flower Pictures at 9:20 AM

Such a lovely orchid and I enjoyed your photos very much. I also took a look at your previous post, showing the Julia Child rose. This is such a coincidence. I took a photo of a Julia Child rose and posted it today on my blog.

I love petunias, but unfortunately the deer love them, too, and they eat up my petunias. Beautiful shots of yours!