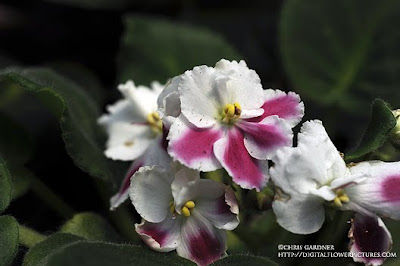 It is always nice to have a flower that hasn’t appeared on this site before. This is the first African Violet picture I have taken in many years. It was on a table with many other varieties at a nursery I visited last week. I was a bit skeptical when I read the tag and it told me to check optimar.info for the name of this plant. I did and it was easy to find my flower. It is quite a website and one thing I found of interest was their horticultural glossary. This definition of an African Violet is courtesy of Optimara.com

African Violet: Sometimes called Violet. A flowering house plant of the gesneriad family. Most common species is Saintpaulia ionantha, though altogether, there are 20 confirmed species. (See Saintpaulia and the species names that follow.) While African Violets are generally recognized for their distinctive rosette growth habit, trailing forms are also common. The first recorded discovery of African Violets was in 1892 in the Usambara Mountains, now a part of Tanzania. The discovery was recorded by Baron von Saintpaul. While Saintpaul is honored with the discovery of African Violets, the AVSA notes that specimens of these flowers had been gathered as early as 1884 by Sir John Kirk.

That is lot more than I used to know about African Violets. They don’t seem as popular as before but I know there are people who are collectors and are passionate about these plants.

This Azalea is blooming in my garden now. It has been beautiful every year for the ten years I have lived here. Despite the fact it had about 8 feet of snow on it this winter it is again doing well. A couple of big branches broke when I shoveled the roof but even those still attached branches are blooming. They will get cut off after flowering. 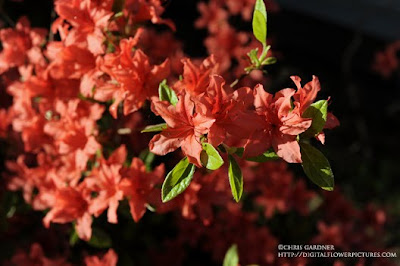 "And in the woods a fragrance rare
Of wild azaleas fills the air,
And richly tangled overhead
We see their blossoms sweet and red."

what a beautiful shot of an African violets! I collect them but I don't have this color (yet) ;-)

I have never seen this kind of colour on African violets before. Pretty! Interesting information. I also loved your red azaleas and the verse...beautiful!

I love the colors on the African violot. Great captures. I also enjoyed going back and looking at your previous posts.

That's a lovely African Violet - nice colors.
My MIL was passionate about them and could really grow them healthy and lush. Sadly I never could. I don't see many anymore either.
Love the light on the red azalea.
I have red ones but they suffer fromt the nibbles of the deer during winter so they aren't nearly as beautiful as yours.

beautiful African Violet---lovely colors. i'm not sure if we have azaleas here, but this looks familiar.

Live in the Moment

Beautiful light and color in the shot of the azalea. Glad it survived the winter!

Wonderful post!
Thanks for sharing.
I would like you to become a Guest Friend in TODAYS FLOWERS.
If you agree send me pictures so I tell your Guest Friend date.