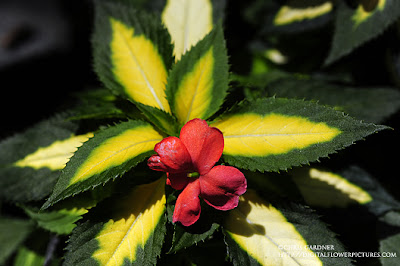 Here is a new and interesting plant. Hybridized from New Guinea Impatiens these flowers can take full sun. I must admit to doing something that I don’t normally do and that is buying plants without researching them. Gardening trends come and go all the time and I am usually loath to ride them. Later adaptation is okay because then the new thing has been proven. Resisting temptation at the nursery is something I really try to enforce.

Last week we got a large annual order that needed to be filled by this weekend. One of the items was two dozen New Guinea Impatiens for near a beautiful free form swimming pool. The nursery didn’t have any regular N.G.I.s we decided to change to Nonstop Begonias. Since the Sunpatiens were sitting there and they looked nice. One tray of six ended up on the truck. At the job I needed a few plants to under plant a large Hibiscus tree and these Sunpatiens looked great against the dark green Hibiscus foliage. This is where I lucked out as the ‘Spreading’ series of Sunpatiens is specifically for containers.

So for Sunpatiens there are three series each come with a good variety of colors. The Compact series is probably going to be the most viable in my opinion. Still getting up to 36 inches tall and quite wide having a slightly smaller habit is desirable to me. The Spreading series and Vigorous series look good for mass plantings. I used the extra couple of plants I had in the little perennial border by the driveway. I will report back later about their performance during the season. 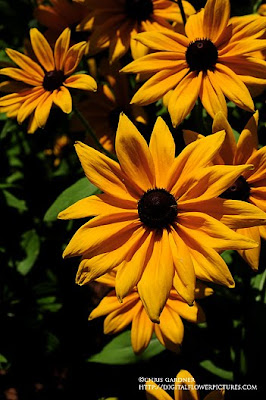 Here is the Sunday bonus flower. I don’t remember who told me that this plant isn’t perennial but they were dead wrong. These are from a group of plants going on its fourth year. To me it has done just what a perennials should do, increase in flowering and size a little bit each year. This flower does well in containers too. It seems to be one of the longer blooming Rudbeckias out there. It blooms all season.
Posted by Digital Flower Pictures at 8:14 AM

I like the Sunpatiens, one of the AGA plants is the white bloomed Sunpatien. I think I like the ones with bolder colored blooms. Better contrast with the variegated foliage. Been thinking about an annual for the front garden for next summer, yes a bit ahead of the game, and this might be a good choice.
Oh, still trying to figure out a good place for a few Bonica....to hell with the deer!

It sure is interesting.... the sunpateins. Loved the foliange colour combo n yes the flower too. Its very similar to balsam we grow here in India.

Thanks for all the information, and for sharing these lovely flowers with us.

So far these are doing great in the garden!