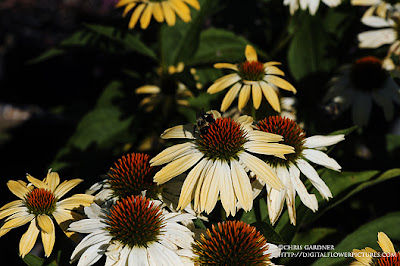 This marks the third time ‘Harvest Moon’ Coneflower has made it onto this blog. This little patch had a lighter color scheme then most ‘Harvest Moon’ and I have to confess I have been enjoying some muted colors in the garden’s palette. Don’t get me wrong I still love bold colors but have become fonder of the subtle color displays too and might even start designing with that in mind.

You can see a Bumble Bee was about the flowers and I was pleased to see some Honeybees around too. There seems to be more and more Yellow Jackets and fewer Honeybees then ever.

It was wildlife week at the Estate or so it seemed. Upon arriving for work on Monday a group of several Coyotes were in the woods raising a heck of a racket. We couldn’t see them but the calls were a little nerve wracking. It reminded me not to bring my dogs to work. They would have been running to see the source of the noise.

We also had a Red Tailed Hawk swoop in and grab a Chipmunk. The Chipmunks have had a population explosion and it was nice to see a predator take one. It all happened in a blur and took a couple of seconds to actually figure out what happened.

Yesterday I decided to prune the male Winterberry Holly because it was hiding one of the females that has a good berry crop this year. Right next to me was a super big Butterfly Bush at eye level. I am not sure what happened but the Butterfly Bushes got bigger than ever this year. Most of them are grown from seedlings and that maybe the reason some got to 20 feet tall. While chopping the head of the Holly a Hummingbird flew in to feed on the Butterfly Bush. It was about 2 feet in front of face and I marveled at its flying and feeding techniques. It was visiting every flower on the stalk (which is hundreds of them) with such precision. The bird never seemed to notice me and flew off after a few minutes. It looked to be on some sort of route.

To top it off we have a large Orb type spider leaving in the front of the shed. Bugs don’t usually bother me (I have seen my share) but this guy gives me the creeps. He is quite industrious completely rebuilding his complicated web several times already. I did notice quite a few flies and mosquitoes in his web so it’s beneficial insect for now.

Posted by Digital Flower Pictures at 9:05 AM