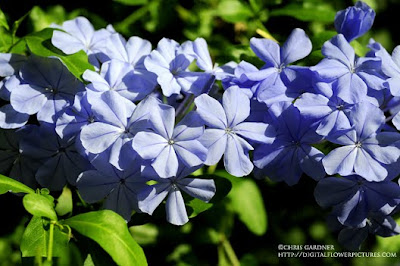 It seems once a year Plumbago shows up on this blog. I will say again I think Plumbago is a beautiful flower. It adds a beautiful touch of blue to your garden and is easy to cultivate. There are some variations in the blueness of some varieties but they are all pretty. It is considered a tender perennial and must be taken inside for winter here. Plumbago seems to tolerate heavy shearing and will often explode in a cloud of color afterwards. It is a native of South Africa but is adaptable to many areas.

Since Plumbago is often called Skyflower I thought it would be a good flower for Skywatch. Here is a photo of a rainstorm of the coast off La Jolla, California. There was a rainbow, too. After a little while watching these clouds the rain came to us. This picture is a rarity here since it was shot with Karen's Nikon D80 with a 18-135mm Nikon lens. 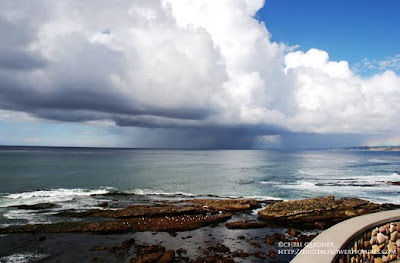 “The sky is the daily bread of the eyes.”
Ralph Waldo Emerson, Emerson's Journals, 1843

Love Plumbago. It is hardy in my area. I guess I should have more of it.
Beautiful sky and great quote.

Lovely shot of the plumbago. They are in full bloom in the Eastern Cape at the moment. They are one of my many favourite indigenous flowers and grow in profusion in our area. Thanks for the visit and your comments.

Lovely photo - there are not many blue flowers where I live. It's a treat to see them when they're blooming.

Oh my that is an amazing picture. Thanks for sharing!

Lovely flower but what a stunning sky shot! Great perspective!

And what a beautiful Skyflower it is & that view is magnificent!

those are pretty flowers and i have never seen them before. The skies look so low and almost kissing the waters. Really beautiful capture!

I would love to fly in that space between the water and the clouds. Oh, to have wings. Beautiful shot.

I love watching thunderstorms roll into the beach. This is s lovely SkyWatch selection.