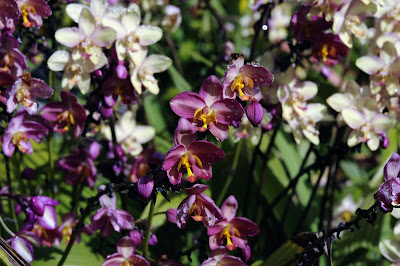 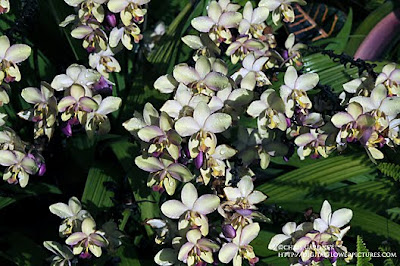 I am posting this from he local hospital after I checked in on Thursday after having a mild stroke at home. I fell off the bed and Karen heard me struggling to get up and called 911, which probably saved my life (I knew I married her for some reason). So I have been prodded poked tested had a flashlight shined in my pupils 100 times. The left side almost total paralysis has gone away after I got a dose of TPA super clot buster, full motion was restored in about 15 minutes after the injection. The three CT Scans I have gotten since arriving her have been positive revealling only a small area of Brian swelling and bleeding but the doctors have been encouraging and I will need a little PT for a bit of facial droop an a bit of slurred speech. General prognosis is I am going to be okay.

These Orchids were growing in Foster’s botanical Garden in Honolulu. They had formed quite a large colony and were beautiful. I think I got the identification right but I m not 100% sure.
Posted by Digital Flower Pictures at 2:56 PM

It is a great thing that you received such early treatment. That is probably the most important thing. I wish you a speedy recovery and get out of that hospital! I enjoy your photos and blog so much, thank you. To keep it up while in the hospital shows your dedication!

Oh Chris, thank goodness for 911 services! How scary, sure glad your wife was there and was able to call. Both my kids have had the 'pleasure' of calling 911 for their dad. I was tending him and they called.
Bangchik (Our Little Vegetable Garden) just did a post on Ground Orchids. I thought they were in the Bletilla striata. But what do I know???
Take care and hope you have continued improvement with a full and speedy recovery.

Wow! glad to hear you got quick attention. I know that these things can happen to people in a surprising range of ages.

I am sure you are already doing better, just for the fact you got the post done from your hospital bed!

Glad to hear that you're doing alright! Sending good thoughts for a full and speedy recovery your way...

The early treatment was a big reason I am still alive. It is always nice to have the dr's using hr words like incredible, great, etc. I think I am going to be able to go home tomorrow :)

i can't get them to grow for me nor ferns strange below photo marvelous as well. sk

Thank God you are alive. And already you are posting beautiful flowers shots!

Thanks so much for the messages, everyone. It really helped boost my spirits!

You are right sbout Bletilla striata. that is the more hardy type of Ground Orchid, you can actually grow those in CT if you are brave. The flowers of that plant are a little different then this version. Thanks for he well wishes

Chris, glad to hear you are doing better. Wonderful that you can use the computer in the hospital. Makes the dull long waits for the doctor to stop by go by faster. I can 'waste' hours on the computer....wait, I already do!! hahaha
The first time I learned of Bletilla striata was on a study trip to northern Virginia. Haven't seen it here in southern VA.