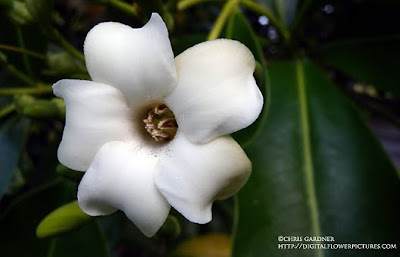 This was an intensely fragrant (reminiscent of Gardenias) little tree growing on the Big Island of Hawaii. Its flowers, which loosely translate in Hawaiian to ‘ten cent flower’, are often used in lei making. The ten-cent part is the price the flowers used to be sold for. They are a little unique in the fact that the flowers change color during the day. In the late morning (as shown here) they are off-white, in the afternoon they have changed to yellow and by the evening they change to an orange color. This change can occur over three days also. There are several scientific reasons for the change. The plant that I saw was all off-white colored flowers and it was about 10:30 am. It can flower any time during the year and is considered a desirable ornamental plant that is non-invasive in areas that its has been introduced to (like Hawaii). It gets small orange berries after flowering that contains the black seeds.
Posted by Digital Flower Pictures at 11:05 AM

Gardenias came to mind as your blog loaded. That is one gorgeous blossom.

Beautiful! I can almost smell the sweetness.

It was a beautiful small scale flower.
A real stinker :)