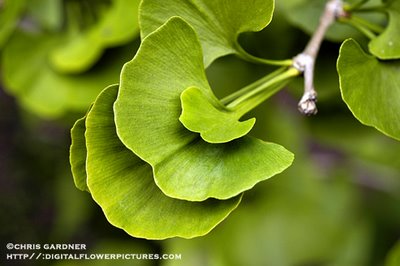 The Ginkgo is unique in so many ways. It is considered by some to be a living fossil and the only link left between the higher and lower plants. It was thought to be extinct from the wild for a period until 1691 when in was found in Japan. Gingko trees can live up to 1,000 years old and the oldest one is thought to be 3,500 years old. I think this clouds about the extinct in the wild part and nobody can be sure if the trees were planted or not. There is one specimen in Hiroshima, Japan that was about a half of a mile from the center of the atomic blast in 1945. The tree budded and leafed out after the bomb and is still alive today.

This is a nice cultivar of Gingko that was selected by Duncan and Davies of New Zealand. I never realized how much the leaf looks like a butterfly until I took this picture. This tree is planted in an island garden, which I am currently renovating. It has remained quite short with a minimum of pruning and has developed a nice shape. It has been in for about 8 years and is about 5’x 4’ now. It gets the wonderful butter yellow fall color. If you like Gingko and have a small space this would be perfect. I have been growing the species and couple other cultivars (‘Saratoga’ and Tube leaf Gingko 'Tubiformis') in this garden and I would have to say this is probably the most elegant of the bunch. I have seen a couple of specimens that looked like they were grafted on a standard. Mine is different and has almost a shrub appearance. I think I like the low grafted one better.

While I was taking the picture of the Jade Butterfly I turned around there was a fly sitting on a Clerodendron calyx. We were both a little stunned but I managed to shoot off this picture. 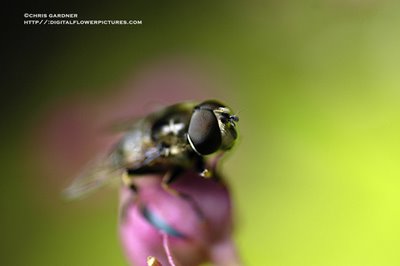 Posted by Digital Flower Pictures at 6:31 AM

I have just planted a ginkgo biloba 'Saratoga' here in Zone 4 and I am wondering how it will look in 5-10-15 years. Right now it is about five feet tall. It reminds me of Maggie, our saluki mix dog, whose ashes were put in underneath the tree at planting.

I just saw your comment. Sorry about your dog. My 'Saratoga' has been in for about 8 years and is 10' tall. Ii is planted in some shade, though. My experience has been Ginkos are slow growing at first then take off.