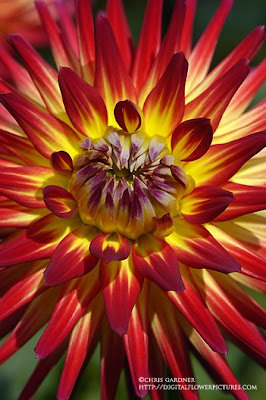 On Sunday Karen and I attended the Mid-Island Dahlia Society Dahlia Show at Planting Fields Arboretum. Not sure how it works but this was a national show by the American Dahlia Society and hosted by the MIDS. The show Dahlias really blew me away. It was nice to see all the different classes of the flowers. Some of the cultivars were familiar and there were some that we hadn’t seen before that were outstanding. I don’t know why I bring my camera to these events since the lighting is so poor. Even though I had fast lenses but really wasn’t happy with the pictures that I got indoors. They were too noisy and needed more Depth of Field.

However since we were early to the show we stopped at the Eastern Trial Garden in Eisenhower Park in East Meadow and the Paul Callahan Dahlia Garden at Planting Fields. Both are beautiful gardens that are well stocked up but I liked the Trial Garden since there were a lot of seedlings and unnamed plants. Most of them looked pretty good to me including this one. The Trial Garden also included a large selection of named cultivars. There was an All-American trial garden for annuals right next to it. All in all it was a Dahlia type of Sunday. It was really hot and humid and Karen was a bit of an anchor about taking the time to take a decent picture but we had fun. I will have to go back on my own with my tripod.

Saturday’s trip to the nursery went pretty well. I purchased about 90 perennials and they are getting delivered Tuesday. There are a few for specific spots in other gardens but I ordered extra to have a little flexibility when we start the job in Greenwich. I probably should have made a list and counted how many plants were needed instead of ordering a lot of stuff and assembling the garden on site. Some of that has to do with what’s available because shopping in the fall for plants isn’t like shopping in the spring.

Here is picture from inside the show. It was about 2/3’s of the room. You can see that it was an amazing floral display.
The Mid-Island Dahlia Society website is here 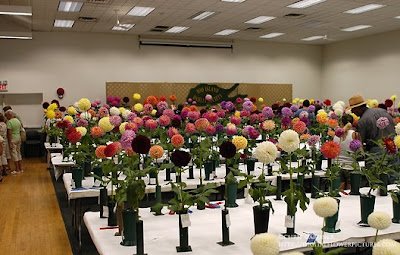 Since it is Ruby Tuesday here are some red boats. This is the Joan McAllister (left) and the Alec McAllister. They were tied up in the Port Jefferson Marina. The company, McAllister Towing and Transportation Company, is based in NYC and is one of the largest of its type on the East Coast. Here is a link to the company history . Among other things they operate the Bridgeport and Port Jefferson Steamboat Company. Which runs the ferry between the two ports. Thanks for visiting. For more Ruby Tuesday and red stuff visit the teach @
Work of the Poet
Posted by Digital Flower Pictures at 6:00 AM

they are so pretty I grew them once and loved them

Who knew there are so many dahlias? The show sounds like fun. Happy Ruby Tuesday!

Oh wow, what a perfect flower.

Beautiful photo of a beautiful flower.

Your photos are always so gorgeous and I love visiting your site. I feel happy and I always leave with a smile on my face.

Love that first shot. I grew up on Long Island. Planting Fields was a place my family visited fairly often. I'll bet your indoor reject photos are things most of us would be thrilled with. As usual, I enjoyed scrolling down the page and seeing all the pretty photos.

great shots. the boats are wonderful sitting there side by side and the shot from the show is so beautiful.

Digital, That dahlia is gorgeous! You were all over Long Island visiting beutiful places! I've been to Port Jefferson and mean to go to Planting Fields Arboretum. Your RED stuff is great! Happy Ruby Tuesday! :)

Love the first picture! You framed it perfectly.

That red and yellow dahlia is breathtaking! What a burst of color for Ruby Tuesday.

Greetings from Juneau (Alaska) Daily Photo!
The Dahlias are gorgeous. Seeing them brought back so many memories from when my parents grew them when I was a child living in Oregon. They don't grow very well here in S.E. Alaska. not enough sunshine.:(
Have a great day!:)
Gwyn