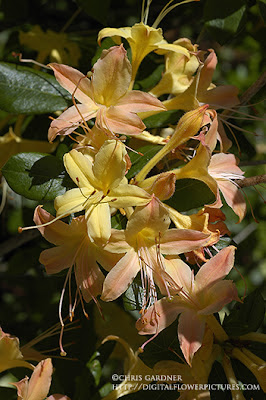 I am always surprised that more people don’t grow these wonderful plants. At least a couple always sneak into any garden I design and build, since they are a fantastic way to extend the Azalea season. Their fragrant and colorful blooms come at a time in the garden when I can use the color. Here is a link and excerpt from a page describing these plants:

“Throughout his life, Ed Mezitt explored the possibilities for expanding the seasons of color in the New England landscape. In the 1940s, he began selecting and propagating the more colorful individuals from seed-grown populations of the native plants grown in his parents’ nursery. The major catalyst to his breeding of the Summer Azaleas occurred in the 1950s when he discovered plants of the brightly colored Cumberland and Plumleaf Azaleas, both of which are native to the southern U.S. Like their New England counterparts, these plants flowered in June and July. Although they lacked fragrance, their intense orange, yellow, and red hues offered the possibility for adding a wider range of flower color when hybridized with the native ones.

The June-flowering results of this program include the fragrant, pink flowering ‘Lollipop,’ with its bronze-green new growth and ‘Pink and Sweet,’ which has become one of the most popular. ‘Weston’s Innocence’ is fragrant, pure white in flower, and its foliage becomes a colorful bronzy green in summer. The cultivar ‘Popcorn’ has profuse white flowers with distinctive yellow throats and a fragrance as intense as its native parent. ‘Ribbon Candy’ has spicy-scented pink flowers, each with a distinct white stripe that imparts a unique bicolor effect.”

Written by: R. Wayne Mezitt who is the chairman of Weston Nurseries of Hopkinton, MA.

The rest of the article can be found here:
Article

I like all the varieties mentioned in the article but this one is my favorite because of the multicolored hues of the flowers. They seem to be able to take pretty wet conditions as I have some planted at the edge of one of the ponds on the Estate. The plant pictured is actually in a wide foundation planting at another garden. It has grown to about 6 feet and was originally in a group of three. I moved two of them last year as they were getting a little clustered and you can see that it came through it very well. I keep them well fertilized and that just adds to the glossy deep green of the foliage. 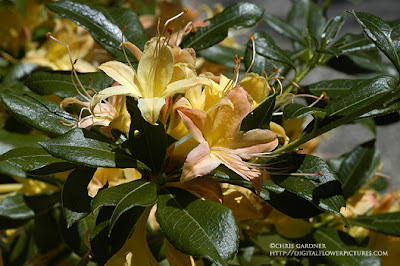 See what I mean about the foliage. It adds a nice backdrop for the flowers.
Posted by Digital Flower Pictures at 5:50 AM

What an unfortunate name for such a cool flower.

I love the soft shades of this flower. Our soil is really not suited to acid loving plants...doesn't stop me though...lol....I just have to remember to acid feed and cocoa shell mulch.

Hi, I am back after taking a break from blogging and enjoyed seeing these new photos. I never saw a gold azalea before. Quite spectacular.

Since I visit Weston Nurseries fairly often, I am going to have to pick up a couple of those although I would re-name it!

Nice to see you again Princess. I have been checking your site for updates.

layanee, your lucky if you can shop at Weston as it is about 3 hours from here.

ruth, we have no problem here with acid soil so a lot of Ericaceae (heath) family stuff does well without amending the soil.

MrBT, I have to agree with you about the name. Don't let it stop you from growing this beauty.