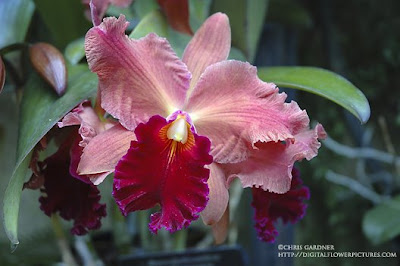 While rummaging around in my ‘old’ pictures I found a couple from the Orchid Room at Longwood Gardens. We are trying to organize a trip to the gardens for the Christmas display. Last year foul weather messed up our plans. These pictures, which don’t have any cultivar information, were shot with the kit lens from the D70s. The camera came with a AF-S DX Zoom-NIKKOR 18-70mm f/3.5-4.5G IF-ED lens. Let’s try and break that down a little (don’t want to get too technical):

AF-S means the lens has a built in auto focus motor.

DX lens are made for the smaller image area of the sensors on DSLR cameras. It may not cover the whole area of a 35mm film camera. There are a few full frame DSLRs but they are at the high end of the price scale.

Zoom is just that. The lens covers multiple focal lengths and can be adjusted to suit the composition of the picture. This is opposed to ‘prime’ lens, which only has a fixed focal length.

Nikkor is Nikon’s brand designation for the lenses it produces.

f/3.5-4.5G is the largest aperture the lens is capable of. Generally the smaller the number the better the low light performance of the lens will be. Here is a definition of aperture from shutterpoint.com . The 3.5 number is the largest aperture at 18mm and the 4.5 is at 70mm. G means the lens does not have an aperture ring and that means changing the aperture must done with the command dial on the camera.

IF stands for Internal focusing, which means the lens doesn’t expand or contract when focusing. This is standard on most modern lenses.

ED means Extra low Dispersion and is related to the manufacturing process of the glass used in the lens. ED glass is generally considered better to help prevent chromatic aberration. All ED lenses have a gold band around the barrel.

These are just some of the designations that Nikon uses for its lenses. Other companies use their own systems to describe their products. In general they will be describing the same things. The main point when I am shopping for lens is whether or not the lens is compatible with my camera, the focal length and the maximum aperture size. 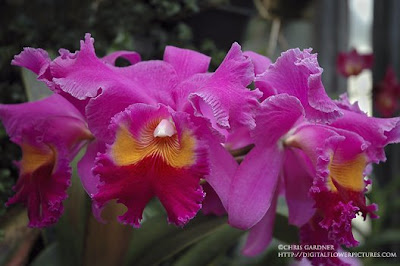 The 18-70mm is a great kit lens but I don’t think I would buy it separately. The lack of a macro function is a real downer but overall it is well built and able to take some beautiful pictures.

Well anyway I hope you enjoy the orchids I think they are fairly unusual.
Posted by Digital Flower Pictures at 8:57 AM

Email ThisBlogThis!Share to TwitterShare to FacebookShare to Pinterest
Labels: Orchid

These princess flowers are ready for a ball! Gorgeous colors.

And thanks for the Nikkor terms. I'm a "budding" Canon guy with a Nikon mentor, so I'm on a learning curve!