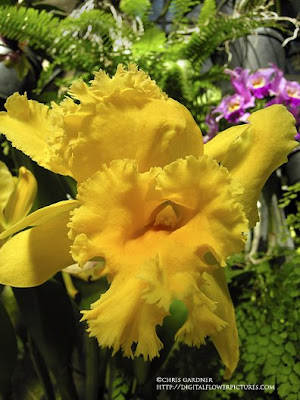 Not sure where this Orchid picture is from but it looked sunny and bright so I decided to use it. Wikipedia defines Brassolaeliocattleya as one of the showiest Orchid hybrids. It is a hybrid between Brassavola, Cattleya and Laelia parents. It is often abbreviated as Blc. They are prized for its showy labellum, which I had to look up and found this definition:

“The labellum (or Lip) is part of an Orchid, Canna or other less known flower that serves to attract insects that pollinate the flower, and acts as a landing platform for those insects. The labellum is a modified petal and can be distinguished from the other petals and from the sepals by its large size and often, irregular shape. It is not unusual for the other two petals of an orchid flower to look like the sepals, so that the labellum stands out as distinct.”

The Holidays are on! There is much to be done and since it is a nice day I have to get a lot of stuff done. My wife has agreed to buy me camera for Christmas. Oh joy!
Posted by Digital Flower Pictures at 10:16 AM

Email ThisBlogThis!Share to TwitterShare to FacebookShare to Pinterest
Labels: Orchid

wow....it's so exotic, I've never seen a flower like this

It is certainly a beautiful flower! Not like any I have seen before! Happy news about your camera!

Adore the rich gold colour but the crinkled edging on the petal is wonderfully unusual! Intriguing shot!