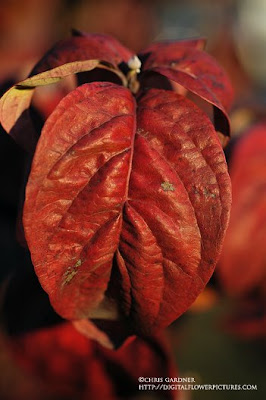 This is the Ruby Tuesday post for the week even though it is Monday. Yesterday after chipping away at my mountain of paperwork I decided to take a late afternoon ride to see some foliage. I wish had enough to time to describe my wonderful ride up through Northern Fairfield County, the eastern part of Dutchess County in New York and Litchfield County. It was amazing since with the drastic elevation changes the foliage would be in peak color at the top of the hills and barely even started at the bottom. It has been a little unseasonably warm and the sun was shining brightly. That bathed everything in kind of a golden glow that was really beautiful. Even though I was looking to take a few pictures I didn’t stop much.

Some of the towns I went through in Connecticut were New Fairfield, Kent, Cornwall, New Milford, Sherman and Brookfield. It reminds me of the ‘old’ Connecticut still a little farmy, a little woodsy and not too heavily populated.

This Dogwood was on the side of Route 7. The sun set shortly after I took this photo. It looks like it is going to be an excellent foliage season with the Maples and Dogwoods leading the charge. I had heard that a leaf fungus was going to keep the Sugar Maples from coloring properly but there were literally thousands upon thousands of beautiful Maples lining the road and hills in full color.

This plant was planted in a bank parking lot. It is Burning Bush (Euonymus alatus) and this is its one redeeming quality in the landscape. Not too many plants turn this intense of a color. We don’t plant Burning Bush anymore since it is invasive and the root system is too competitive. That probably won’t make a difference since there are so many already. They have completely colonized some areas of the woods. 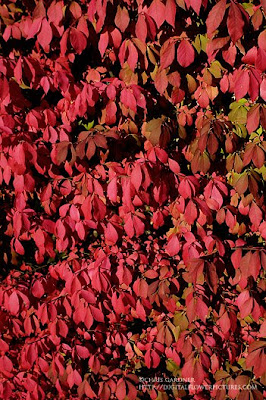 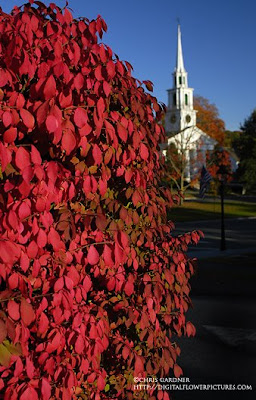 Stepping back from the macro shot was this church on the New Milford green. I have photographed this church several times including at night. Here is another photo of it. I bought a Circular Polarizer Filter for the 24 mm/1.8 Sigma lens. It cost about one-third the cost of the whole lens. It really kicked in on this shot. 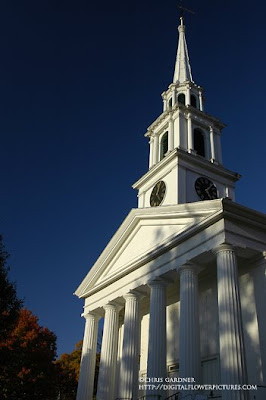 Here is a shot of my two assistants in what I call the dogmobile. It is 1995 Jeep Grand Cherokee and we use it for work sometimes and hauling the dogs around. Its old but has low mileage and runs good. Juno is all excited since she spotted a couple of Ring Neck Pheasants. She is still too young to drive. The other dog is Ruby Tuesday. 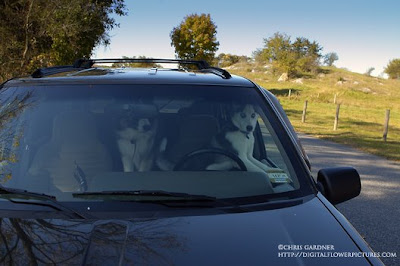 Posted by Digital Flower Pictures at 5:53 AM

hehe, little dog helpers! :) They look like they want to run down the road with you!

Beautiful foliage. There was a lot of foliage on my backpacking hike this weekend here in Texas, unfortunately I am not up on my trees here. It was nice to see, though!

Oh, the e on Zoe doesn't have the two dots. They debated this for awhile and decided against it. I didn't realize, but it is a biblical name!

Here's mine:
Chips and Salsa and
Shabu-shabu on the go

Some really splendid shots, Digital Flower! I was in western Duchess County on Saturday where I took a lot of my Fall foliage shots! Happy Ruby Tuesday! :)

Lovely red foliage! We have Summer all year round, so we don't get to see such beautiful sights of Autumn.

Thanks for the tip about burning bush. Here in Seattle I see it planted a fair amount and was going to get one, but you have warned me. They do get red, don't they? Your dogwood leaves are beautiful. I did some leaves for Ruby Tuesday also. Come see if you have a chance.

WOW! Those are just amazing photos!~ I always look forward to see your posts with your amazing flower shots;)

Did you really call your dog Ruby Tuesday? Love it :o)

Gorgeous series of reds and beautiful four-legged companions. I love your WW shot too. So many exquisite photos to visit as always.

I love your assistants!!

the church shots are stunning. what a lovely trip you took.

I didn't realize that dogwoods changed colors like that. I love their blooms in the spring, but fall color too, that's almost a perfect plant!