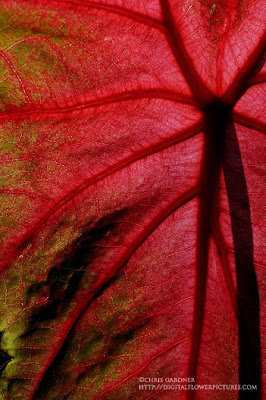 The Caladiums did very well this year. Enough so that I can see planting double or triple the amount next season. Keeping the animals from eating them is probably the hardest part of Caladium culture around here. After a bit of a rocky start the Caladiums in the garden really flourished despite a couple of dry spells. Mine were planted in a part shade location but these plants do well in full shade. Recently I have been seeing some planted in full sun. That seemed quite popular in North Carolina. That must require regular watering. We just treat them as annuals but you can dig and store the tubers. There are over 100 cultivars to choose from.

This Chrysanthemum (Chry. x morifolium) is named ‘Jennifer’ and I am including in this weeks Ruby Tuesday post because of the red in the center. It was hybridized by the Yoder Brothers in 1994 and is part of the Yoder's Prophets® Series of mums. This was for sale at a local garden center. I was trying to determine the retail price of 8 inch Mums. The prices at three places varied from 4.99 to 7.99. You could get a small discount if you bought 10. It looked like everybody was overstocked. 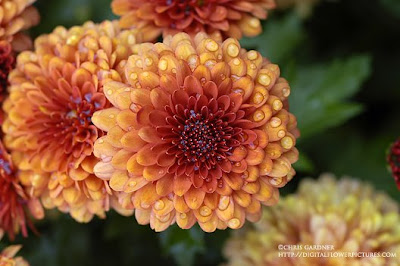 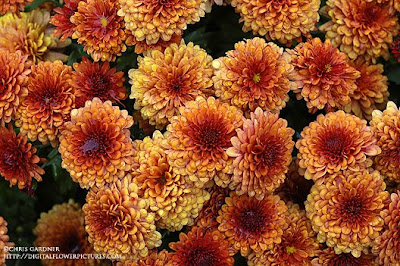 The CDs have been piling up on the side of my desk waiting to be ripped into the computer. Some were bought through the BMG Club, others at a tag sale and somebody gave 4 or 5. Here is the list of what I got into Itunes during the weekend.


It is quite a mix of artists, I'll listen to just about anything. There are now 4500 songs in my library. I don’t think I am ever going to get to listen to all of them.

Thanks for visiting. For more Ruby Tuesday and red pictures visit the teach @
Work of the Poet on Tuesday.
Posted by Digital Flower Pictures at 10:37 PM

A gorgeous post Digital, that I was going to say would be perfect for Ruby Tuesday and then as I got to the center of your post you say t IS for Ruby Tuesday! Great! My Ruby Tuesday post will be up this afternoon with Mr. Linky. Don't forget to come by and sign in! :)

Beautiful flowers as usual! Mine is posted HERE. Happy RT!~

Wow.. great shot on the first picture! It's so awesome!

My RT entries are posted here and here. Happy Tuesday!

The first photo is spectacular. Absolutely perfect for a Ruby Tuesday.

That variety of mum is so pretty. The colors are wonderful.

That variety of chrysanthemum would be perfect for a Thanksgiving table centerpiece.

I have never seen chrysanthemums of that colour! They are awesome! Beautiful pics!

OMG! I'm not surprised that Caladium is called Angel Wings. It looks just like that (at least in my mind :o)